A Covid-19 patient whose “selfish” valve-style face mask was blamed for a cross infection in a quarantine hotel last week has been found to be carrying a new variant of the virus with a high number of mutations, marking the first known appearance of the strain in Hong Kong.

The Department of Health revealed on Thursday night that a genome sequencing analysis confirmed the patient, who arrived in the city from South Africa, and another hotel guest who tested positive a few days after him, were infected with the B.1.1.529 coronavirus variant. Both were fully vaccinated.

The new variant — which is expected to be designated “Nu”, in keeping with global naming conventions based on the Greek alphabet — was first discovered in Botswana. Apart from the two cases in Hong Kong, only nine others have been identified worldwide so far — three in Botswana, and six in South Africa.

Though the infectiousness of the new variant is still unknown, some overseas scientists suggest it could be of real concern given the “incredibly high amount of spike mutations”.

The variant has been found to have 32 spike protein mutations, compared with the 13 to 17 seen in the more prevalent Delta variant, according to some overseas research.

Generally speaking, the higher the number of mutations — which are known to help the virus evade the body’s immune response — the greater the chances of infection.

Some scientists have speculated that the variant may have evolved during a chronic infection in a person with a weakened immune system.

“Scientific information on the public health significance [of] this lineage is lacking at the moment. It is classified by the World Health Organisation (WHO) as ‘Variants Under Monitoring’,” the Department of Health said in a statement on Thursday night.

It added that the Centre for Health Protection (CHP) would closely monitor any new developments.

A source said the WHO would hold an internal meeting on Friday to discuss the new variant.

Professor Leo Poon Lit-man, head of the University of Hong Kong’s public health laboratory sciences division, said it was not yet known whether the new variant was more transmissible than others.

“The public health implications [of this variant] remain unclear,” Poon said. “It is possible that some mutations found in this variant could reduce vaccine effectiveness, but this remains uncertain.”

He said scientists from Britain had advised watching out for the variant based on abnormalities in its genetic sequencing, but the actual characteristics of the strain were not yet fully understood.

Hong Kong’s first patient found to be carrying the variant was a 36-year-old man who arrived from South Africa on Nov 11. He was in quarantine at the Regal Airport Hotel when he tested positive for Covid-19 on Monday last week.

A guest staying in the room across the hall — a 62-year-old arrival from Canada — tested positive five days later.

As a precaution, authorities ordered all guests staying in 12 other rooms on the floor to extend their isolation by 14 days, with the remainder to be served at the government’s quarantine facility at Penny’s Bay. No related cases have been detected so far.

The first patient was found to have worn a reusable mask featuring exhaust valves on multiple occasions when collecting meals and disposing of rubbish.

The masks’ valves only filter air on the way in, but do not filter the air being exhaled by the wearer, prompting Hong Kong’s leading microbiologist, Yuen Kwok-yung, to label them “selfish”.

The CHP subsequently said people staying in any of the city’s designated quarantine hotels would no longer be allowed to wear valve-style masks from Thursday onwards.

Guests must instead wear a surgical mask when opening the door of their room to collect meals and take out their rubbish.

The centre also updated its guidelines for hotel staff and aircrew to remind guests and passengers not to use the valve-style masks. 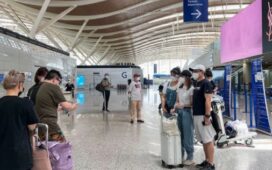 Students, expats jostle for limited flights out of Shanghai in wake of lockdown

As Beijing tightens its grip over Hong Kong, does 'one country, two systems' still apply? 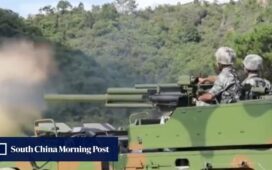