As food prices rise in Singapore, there are some who find themselves unable to afford a simple meal.

They would turn up at different meal times.

“Every day at around 8am, an uncle will eat leftover food like soup and rice. But he hasn’t been here for more than a month,” a cleaner told the Chinese media outlet.

Several others would come during lunchtime or dinnertime. One man in his 60s would even bring his own containers to pack the leftover food.

On Oct 21, reporters from 8world saw a man in a blue shirt eat scraps off a plate. He then circled around the hawker centre and sat down at another table to eat someone’s leftover noodles.

When they approached him, he refused to answer questions.

Money for beer but not for food

Some of these men appeared to prioritise other things over a meal.

A man was seen limping around the hawker centre as he looked for leftovers at tables and the tray return area on Oct 21 afternoon. He was later spotted buying three bottles of beer from a drinks stall.

He returned the next day but left minutes later because he did not manage to find food. 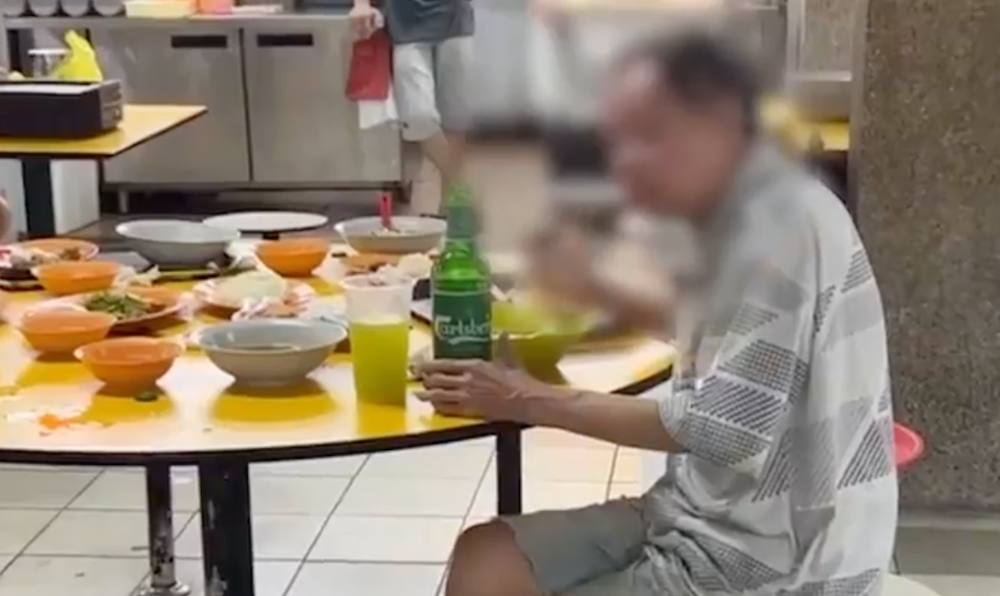 Another man, surnamed Hong, was similarly holding a bottle of beer while eating the food a large group of diners had left behind.

A drinks stall assistant said that Hong had bought the beer with his own money, adding: “I saw him eating leftovers and thought he didn’t have money, but he has money to buy food”.

Hong told reporters that he lives in the area, but did not want to share why he ate other’s leftovers and even told them off, saying “Don’t ask so much”.

A spokesperson from the Ministry of Social and Family Development said that the authorities are working closely with grassroots volunteers and hawkers to identify these people to provide them with financial assistance or meals.

He also urged the public to contact the community care hotline at 1800-222-0000, the nearest social service centre or family service centre if they encounter people who need help.

In August, a man called Syed Zulhelmi was dining with his family at a McDonald’s outlet when he saw a man on the hunt for leftovers.

The man had even gone to the extent of picking half-eaten french fries off the floor and rummaging around dustbins.

Syed offered to buy the man a meal, however, the latter rejected his offer and walked away to look for more food.

Undeterred, Syed ordered the man a Filet-O-Fish meal with upsized french fries and asked a McDonald’s employee to pass the food to the stranger.

When the family returned to the outlet later to see if their plan worked, they were relieved to see the man eating the food.