She was playing video games for up to 16 hours a day, now she designs them

One summer, as a teenager, Allison Yang had a novel way of playing video games for much longer than she was allowed.

Her parents had enrolled her in English tutorial classes and a choir group. Yang would turn up but leave soon after, then phone her home landline to see if anyone would pick up. If no one did, then that meant her parents were at work. She would then hurry home and squeeze in as many extra hours on the home PC as she could.

When her parents got home they would ask her how her day was and she would make up a whole list of things she had done. As a reward, she would get to play for another hour.

“I was really an addict,” the 36-year-old says. She was playing, even sneaking into her parents’ room at night – where the PC was kept – to get more gaming in. 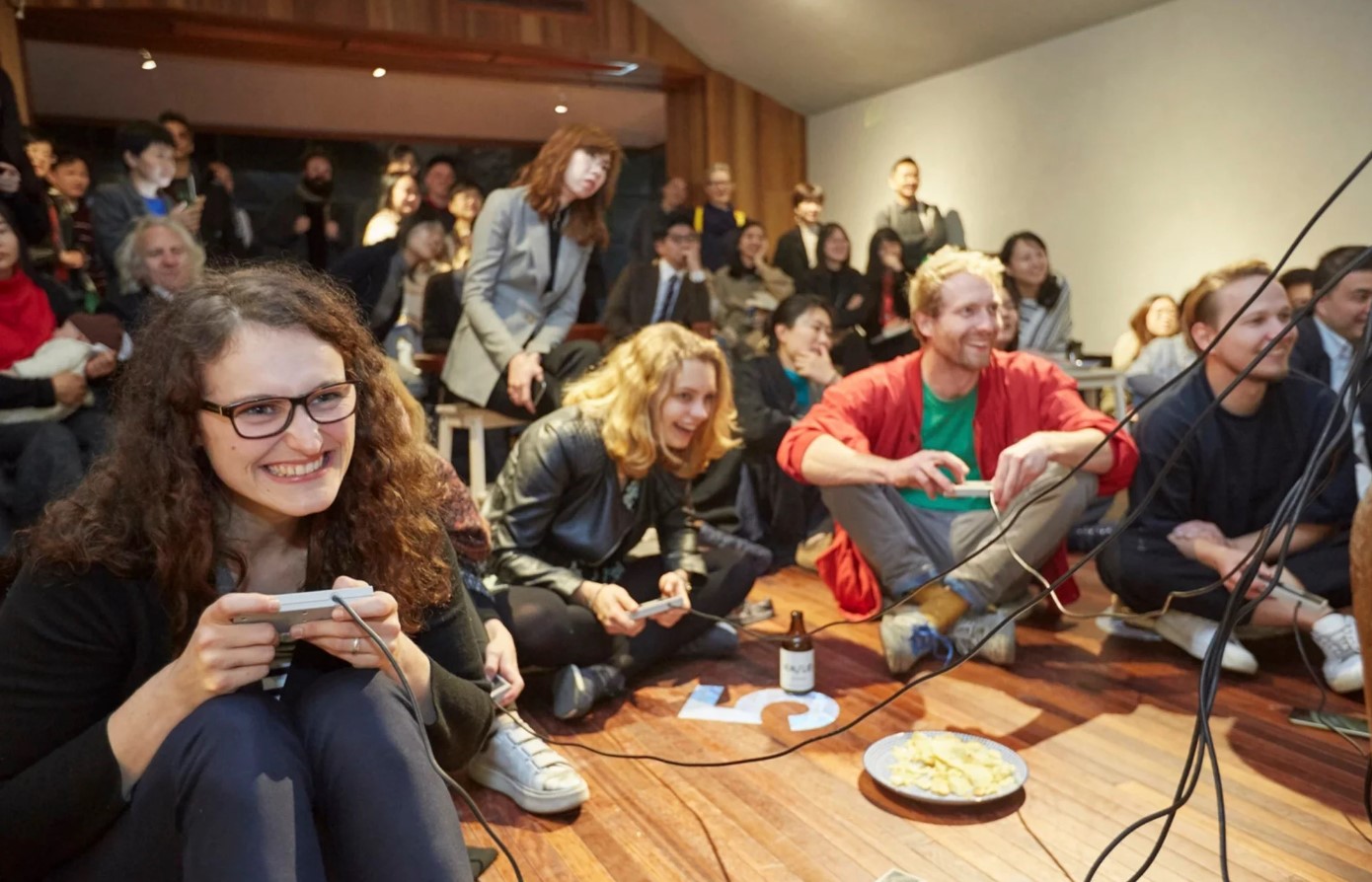 Of course, she was busted eventually – her parents came to pick her up from English class one day and she was not there. They started hiding the mouse and keyboard to prevent her playing, but she always managed to find a way.

It was not until they started hiding the monitor that they managed to make any significant dent in her playing time.

That stopped her for a while, she says, but not long after that she started university.

“In China, most teenagers aren’t allowed to play games at home, so when we go to university it’s like we’re out of prison,” she says. Near full-time gaming resumed.

Her obsession started when she got her first PC as a 12-year-old growing up in Urumqi, Xinjiang province, in China’s northwest. She quickly developed a taste for Taiwanese martial arts role-playing games (RPGs). 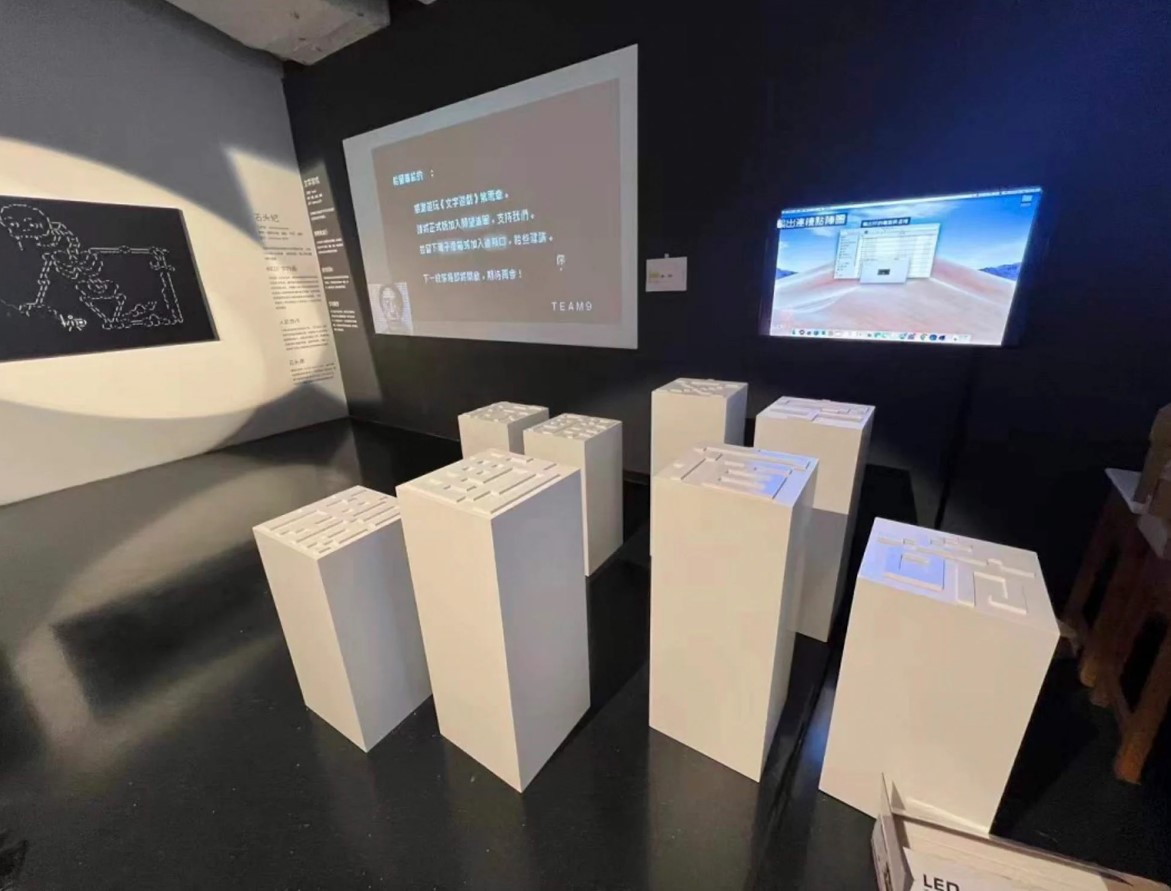 Now a game developer, producer and curator – among many other hats she wears – Yang is not playing for 16 hours a day any more, but the multiple projects she is working on at any one time can take up just as long.

We are talking at Current Plans, an art space in Hong Kong’s Sham Shui Po neighbourhood in Kowloon, where Yang, in partnership with the Goethe-Institut Hong Kong, hosts a twice-monthly communal gaming event called Game Kitchen consisting of talks, workshops, performances – and, of course, games playing.

Posters of some of her favourite games line the walls. Some are instantly familiar – The Witcher 3, The Legend of Zelda: Breath of the Wild. Others, like The Stanley Parable and Oxenfree, are likely to be unknown to most, but speak far more of her true gaming passions.

Yang’s primary interest in gaming is not racking up headshots in Call of Duty or executing carefully coordinated Dota ganks. Instead, it is how games can be used to tell a story, deliver a message or teach about culture.

For example, her favourite game of all time is The Beginner’s Guide (2015), a narrative game created by David Wreden that, according to its own description, “lasts an hour and a half and has no traditional mechanics, no goals or objectives”.

“It’s very meta,” Yang says. “The thing is, the narrator lies, like a modern or contemporary novel – it’s a trick, and you constantly realise the author has fooled you. But it reveals a lot of surprising elements.

“[Wreden] also explains a lot of anxieties for game designers, some of the things you don’t think about [when playing] computer games.”

Yang’s own route into game development started when she was studying for a PhD in museum studies in Germany, from which she later dropped out – because of playing games too much.

At the Documenta art festival in 2017, in the German city of Kassel, she met the curator of a Chinese animation biennale who had read some of her games articles – she started writing games reviews for Hong Kong newspaper Apple Daily in 2013, before taking up a regular column, titled “Game On”, for the Initium Media website in 2016.

He offered her the chance to curate an exhibition in Shenzhen, southern China, of indie and art games that explored the connection between gaming and life. She jumped at the chance.

Further curations followed, during which she got to know a French art collector, Sylvain Levy, who was looking to create a virtual space to exhibit his family collection of Chinese contemporary art.

Yang had been following the development of virtual museums for a long time and did not believe them to be particularly successful. She convinced Levy to invest in a game that included all the pieces he wanted to exhibit, but people did not have to see it as a museum.

She also gave things a twist.

“I’ve worked with a lot of artists. Most of them, especially the young ones, are struggling. Our world can be very ugly and exploitative, and there are games about art, about the beautiful part of it, so we were thinking maybe we do a more vengeful thing,” Yang explains.

“We were thinking we could do something violent against the artworks.” 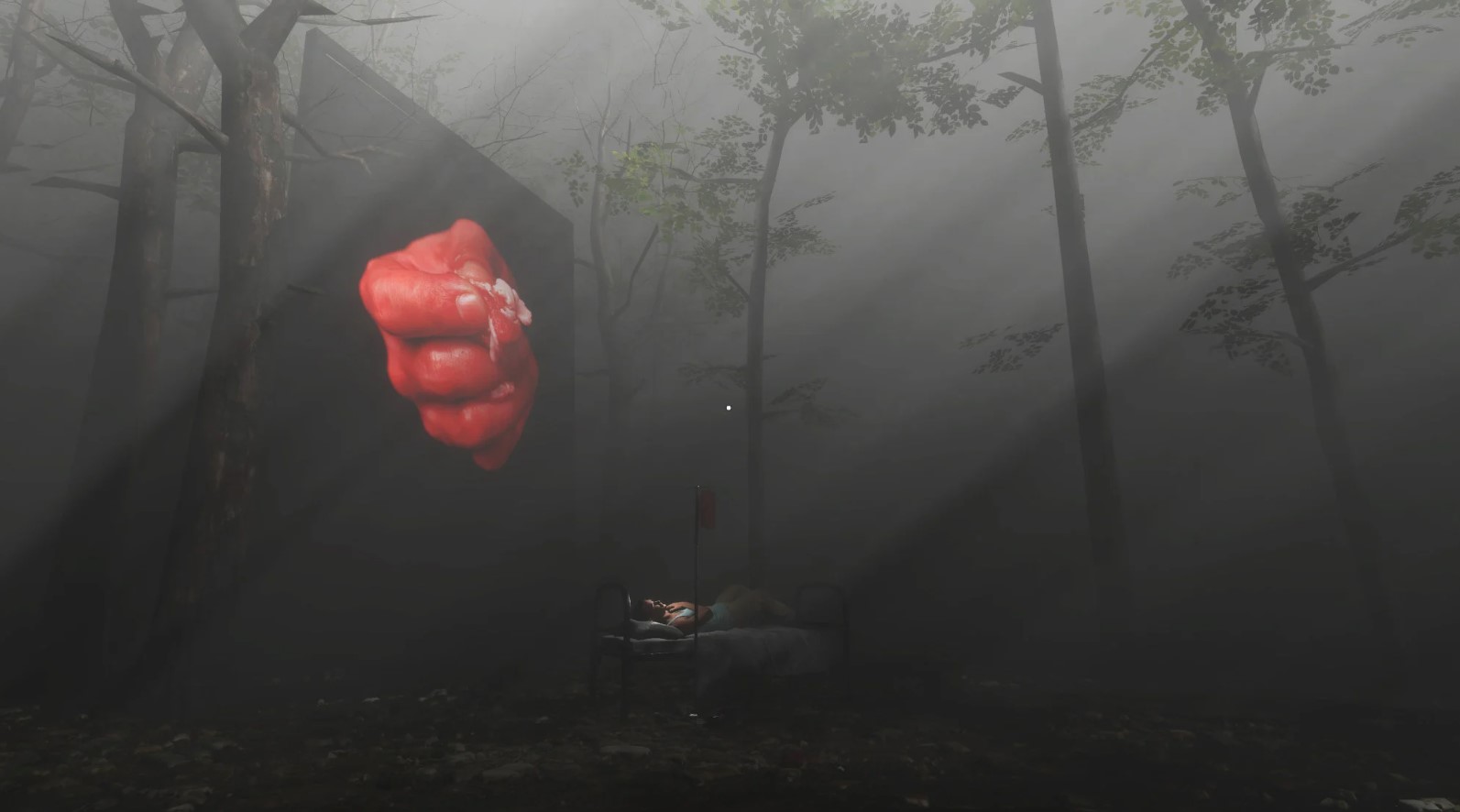 Working with a Hong Kong artist with programming skills – Yang is a storyteller, not a programmer – she came up with the idea of a sci-fi world in which the principle of “winning at the starting line”, popular among Chinese parents, could be achieved by downloading the brains of deceased geniuses and creatives into those of their children.

But because creative people are often unhappy, first, unpleasant memories would have to be “cleaned” from their brains before they could be downloaded into children. As a player, you are one of these cleaners, entering into surreal mindspaces to find painful experiences and destroy them. Often that means destroying the artworks themselves.

Called Forgetter, the game is about 70 per cent complete and available on early access on Steam. It won the Excellence in Innovation Award at the 2021 IndiePlay China Indie Game Awards, as well as the Best Serious Game Award and the Honorary Mention Award at the Tencent-affiliated GWB (Games With Borders) Game Awards the same year. 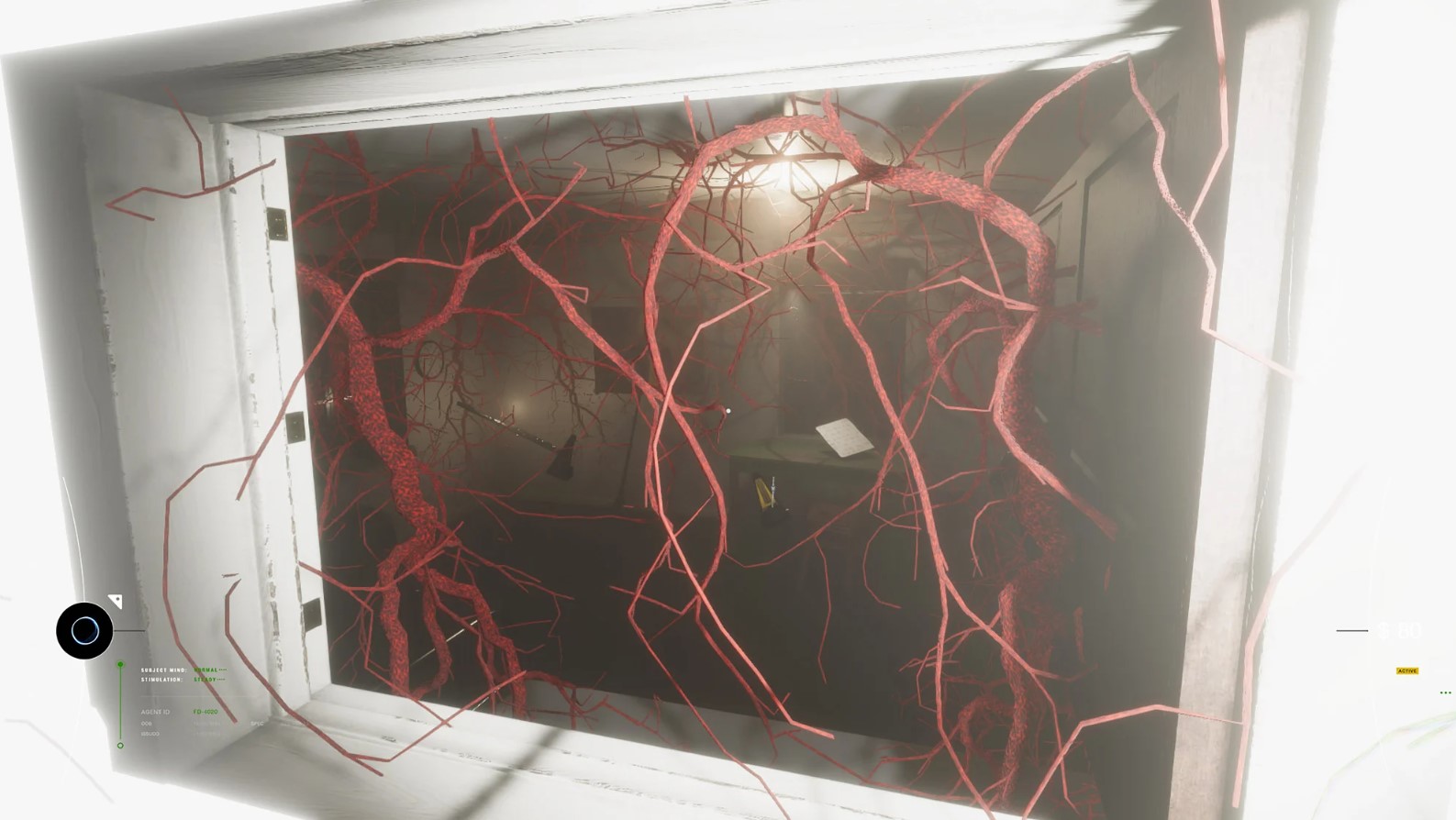 She is now working on a game with German game designer Alex Zenker about children trying to survive without their parents in a difficult environment.

The idea was born after realising that she and Zenker, who is from Leipzig, a city in the former East Germany, had had very similar childhoods based on their working-class upbringing in societies transitioning from communist to market economies, where unemployment was high and many parents turned to alcoholism and gambling – even suicide.

“We really had a lot of friends who grew up [in families] like that,” she says.

On the events side, in October she stepped things up a notch with Game Atlas, a four-day conference she curated featuring presentations from 14 game designers from three continents, all streamed live online. 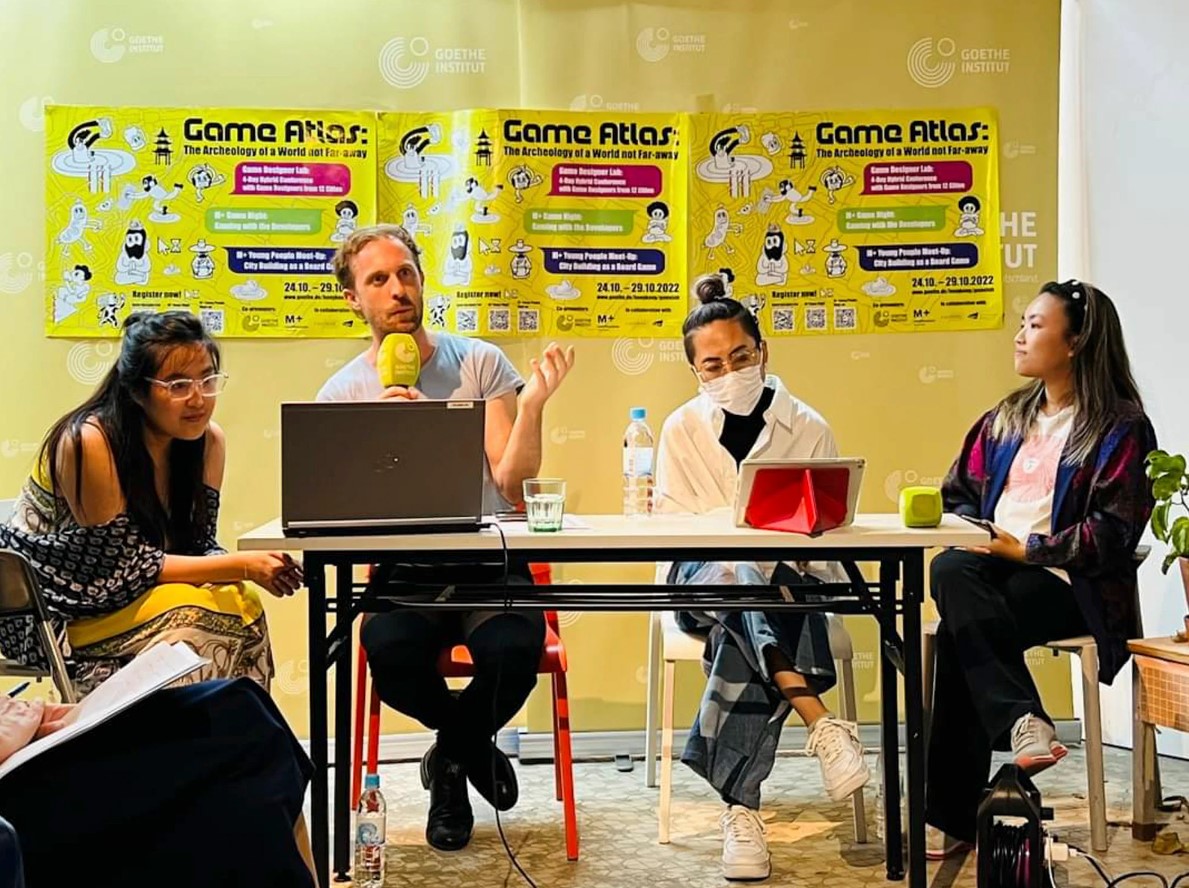 The conference was followed by two further events at Hong Kong’s M+ Museum of visual culture, in the West Kowloon Cultural District, consisting of a live game-playing experience and an educational programme for young people.

The event, which drew between 80 and 100 people each day on-site and online, was co-presented by the Goethe-Institut Hongkong and M+ Museum, in collaboration with Current Plans and City University of Hong Kong’s school of creative media.

“To bring so many people together via games in Hong Kong is surreal. Many of them exchanged ideas and even initiated collaborations during the week, so there are more games coming from them later,” Yang says. “Friday night at M+ we had a full house with registered visitors and then walk-in ones as well.” 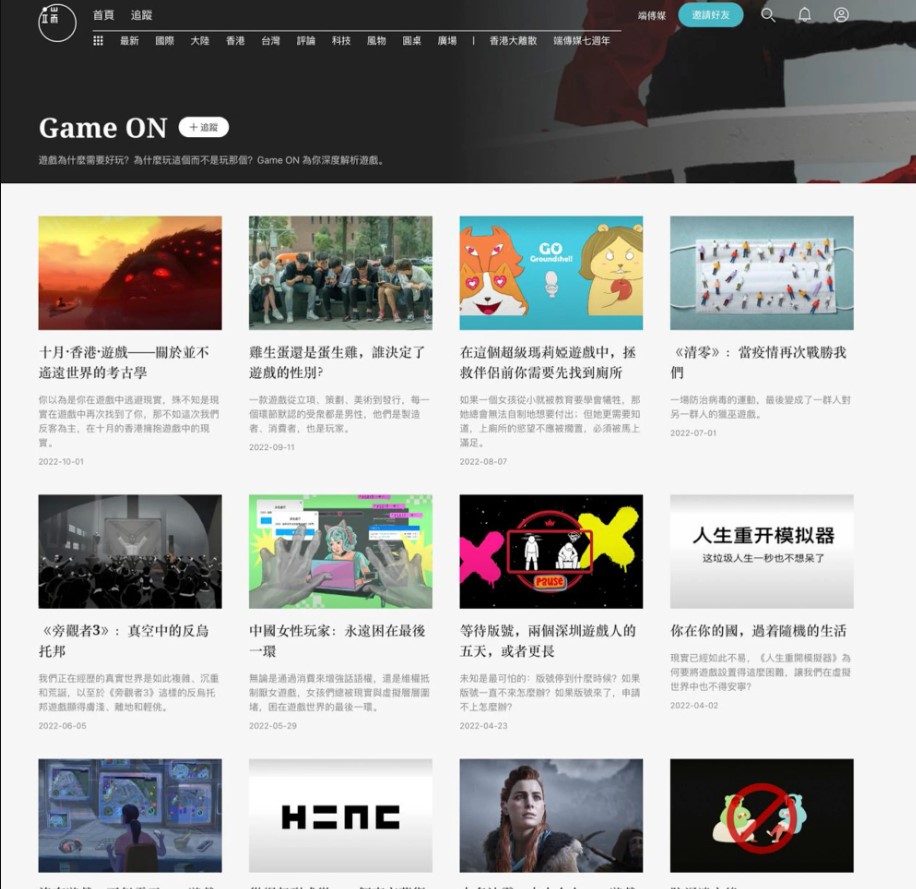 Everyone from schoolteachers to civil servants from the Hong Kong government’s Leisure and Cultural Services Department asked her whether she will hold such an event again, something she hopes to do.

An event like Game Atlas is a big step on the way to something the confessed “games evangelist” is continuously striving to change – the negative perception of games and the people who play them that still exists, particularly in China.

“At the beginning, there was a term called ‘spiritual opium’ [to refer to gaming]. Gaming was against study and achieving in life,” she says.

“But the more I researched about it, I found it’s bigger than that. It has to do with government regulation in private lives and also the culture of censorship in general in the country. It’s also something about subculture control.

“Now it’s all changing because the industry is growing, there’s a lot of money in it. But a lot of people, including those who are making policies or doing research about games, when you talk to them it’s surprising to see how little they know.

“They think games are Fortnite, or in China it’s Honour of Kings, or recently it’s Genshin Impact, and nothing else. They think people who play games are brainless children, which is not true.”