Singaporean says Malaysian girls have better calibre than Singaporean girls: “they seem to be better looking even without makeup”

The views expressed here are those of the author/contributor and do not necessarily represent the views of The Independent Singapore.

A local netizen wrote in a Facebook post that they felt Malaysian girls were of a better calibre than local girls.

In an anonymous post to popular confessions page NUSWhispers on Monday (Sep 5), the netizen wrote: “Generally, I find that Malaysian gals seems to be of better calibre than our local ones”.

They added that Malaysian girls were more hardworking, had better attitudes and were prettier than their local counterparts.

“Firstly, they are hardworking. Most of these ladies who I know dont mind working overtime or help to cover the duties of those who are on leave. Most of the time, they are the last to leave the workplace based on my observation. On the other hand, the locals are usually the first to zao, even before 6pm”, the netizen wrote. 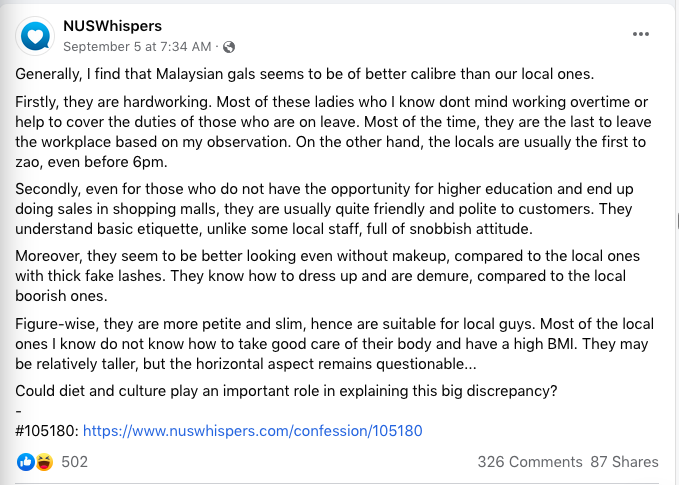 They added that even those without higher education, who were doing sales jobs, were friendly and polite to their customers. “They understand basic etiquette, unlike some local staff, full of snobbish attitude”, the netizen wrote.

In the post, the netizen said that most of the local girls they knew did not know how to take care of their bodies and had a high BMI. “They may be relatively taller, but the horizontal aspect remains questionable…” the netizen wrote.

“Could diet and culture play an important role in explaining this big discrepancy?” they asked.

Within a few days, the post drew over 500 reactions and more than 300 comments. Here’s what netizens said: