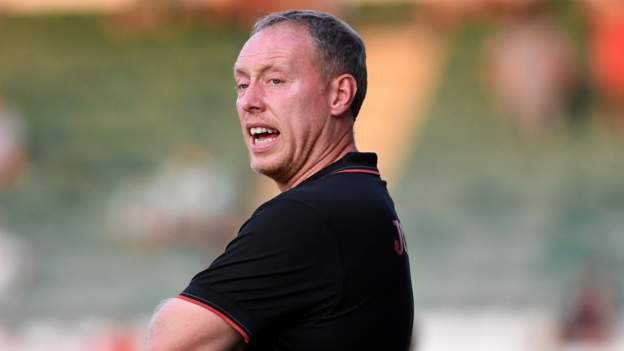 Cooper, 41, had been in charge at the Championship club since June 2019 and had a year remaining on his contract.

He led Swansea to the play-offs in each of his two seasons in charge.

“I am very proud of what we have achieved over the past two seasons, especially getting to the play-off final, but it feels like a good time for all parties to make a change,” Cooper told Swansea City’s website.

“It is a fantastic club, with incredible supporters and I am very grateful to them, to the players and all the staff for making me so welcome here. I wish the team every success for the future.”

There had been continued speculation Cooper could depart after defeat to Brentford at Wembley in May in the Championship play-off final.

Swansea say they made “efforts” to discuss the idea of a new contract with Cooper, but that it was “subsequently agreed by both parties to mutually part ways”.

“We feel this conclusion is in the best interests of the club with a new season just over two weeks away,” said Swansea chief executive Julian Winter.

“This decision was reached amicably two weeks ago, and I would like to place on record my thanks to Steve for taking pre-season and for his professionalism while this process has been resolved.

“During his two years in charge, Steve has immersed himself in the club and continually improved our league position as well as giving young players a first-team opportunity.

“It has been well-documented that since the club dropped out of the Premier League, the financial position was one that meant the club had to be far more sustainable and we are pleased that so many young players have come here and been afforded that opportunity by Steve and his coaching staff.

“Just like the playing squad, when a manager has 12 months left on a contract, there has to be a coherent plan that allows the club to continue to build both on and off the pitch, and that involves dialogue around contracts.

“We felt as a club that the situation needed clarity and with a new season edging closer, the mutual nature of this decision allows both parties a chance to look forward.

“I would like to take this opportunity to wish Steve the best of luck for the future and thank him for the work he has done during his two years with the football club.”

Former England Under-17 coach Cooper was in the dugout for Swansea’s pre-season friendly win at Plymouth Argyle on Tuesday night, but leaves the Liberty Stadium with the new Championship season a little over two weeks away.

Cooper is known to have had concerns about the strength of his playing squad following the summer departure of Andre Ayew as well as the exits of players like Freddie Woodman and Marc Guehi, who had impressed during loan spells.

Swansea are hopeful of making a swift appointment as they seek Cooper’s replacement, with potential candidates already being considered by the club’s hierarchy.

Cooper’s exit is not a shock given the long-standing question marks surrounding his position.

He was a contender to take over at Crystal Palace before Patrick Vieira landed that job, while he was also heavily linked with Fulham until they opted for Marco Silva.

Cooper impressed in his two seasons at Swansea, finishing sixth and then fourth in the second tier despite working on a limited budget.

He made a number of shrewd signings and produced a team who played attractive football at times, although Cooper’s Swansea often ground out results, particularly in the 2020-21 campaign.

They showed their resilient side to beat Barnsley in last season’s play-off semi-finals, but were beaten by Brentford – who had also been Swansea’s conquerors in the previous year’s play-offs – after a lacklustre display in the final.

Cooper has been at the helm for Swansea’s pre-season campaign, and spoke to the media for the first time since missing out on a return to the Premier League following their 2-1 friendly win at Plymouth.