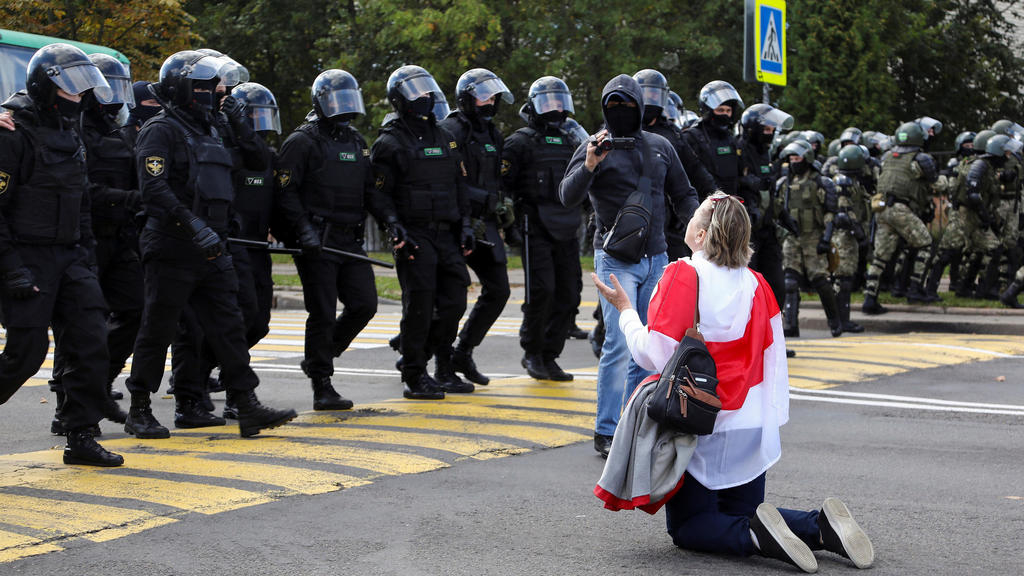 Belarusians have been demonstrating against the disputed re-election of Lukashenko for a month, with more than 100,000 people flooding the streets of Minsk for four straight weekends.

On its websites and social media channels, the opposition has announced the slogan “We won’t let him sell the country” ahead of Lukashenko’s first face-to-face meeting with Putin since protests began, which is set to take place on Monday.

Analysts say Putin may seek to exploit Lukashenko’s political vulnerability to wring concessions from him, but any agreements compromising Belarus’s sovereignty and independence are likely to enrage Belarusian protesters further.

Over the last week, Lukashenko’s security forces have stepped up arrests of opposition figures who are still in Belarus.

After a massive protest last Sunday, Maria Kolesnikova, one of three prominent women opposition figures, was jailed after she resisted expulsion and tore up her passport.

More than 600 people were detained last Sunday in one of the largest waves of arrests since the early days of the demonstrations.

Masked riot police on Saturday violently detained several dozen women demonstrators and threw them into vans during a smaller protest in Minsk.

Presidential candidate Svetlana Tikhanovskaya, who the protest movement says won the vote on August 9 but was forced out of the country, paid tribute to all those who planned to take to the streets for Sunday’s demonstration, which is set to begin at 1100 GMT.

“Over the past month we have become a truly heroic people,” Tikhanovskaya, a political unknown until the election, said in a video address.

“We are continuing our fight for freedom,” said the 38-year-old former stay-at-home mother, who has fled into exile in neighbouring EU member Lithuania.

Tikhanovskaya contested the election after her blogger husband was jailed and barred from running along with several other prominent Lukashenko critics.

The unprecedented protests broke out after Lukashenko, who has ruled the ex-Soviet state for 26 years, claimed re-election with 80 percent.

Lukashenko has refused to step down and has turned to Russia for support to remain in power.

‘We have space’: thousands march in Germany urging EU to take in more migrants

Taiwanese art and Thai protests: Best photos of the weekend

'We pick your food': migrant workers speak out from Spain's 'Plastic Sea'

Politicians like to posture about Northern Ireland. But no one really cares about us | Sarah Creighton