A woman whose purse was allegedly stolen at a playground in Punggol Central said that the thief has owned up to his misdeed.

Stomp contributor Nora (not her real name) earlier shared how her purse had been stolen by a teenager at a playground near Horizon Primary School on Aug 5, between 4pm and 5pm.

The purse contained $1,690, which was part of a sum that the 27-year-old single mother of five kids received as financial assistance

Nora alleged that a teenager had, on the pretext of asking her for directions, stolen her purse while she was distracted. She subsequently lodged a police report.

The police confirmed with Stomp on Aug 10 that a report was lodged and investigations are ongoing.

Nora, who is unemployed, emphasised in her Stomp appeal on Aug 12 that she was not looking for sympathy and just wanted the culprit to be found.

Hours after the Stomp report, Nora said she received the following message from a woman who identified herself as the culprit’s mother and a neighbour staying at the same block.

The woman claimed she had found Nora’s purse under her son’s pillow and that all the cash had been spent.

The woman begged Nora not to make a police report as her son was still schooling. She promised to pay Nora back $100 every month and said her family was not wealthy too. 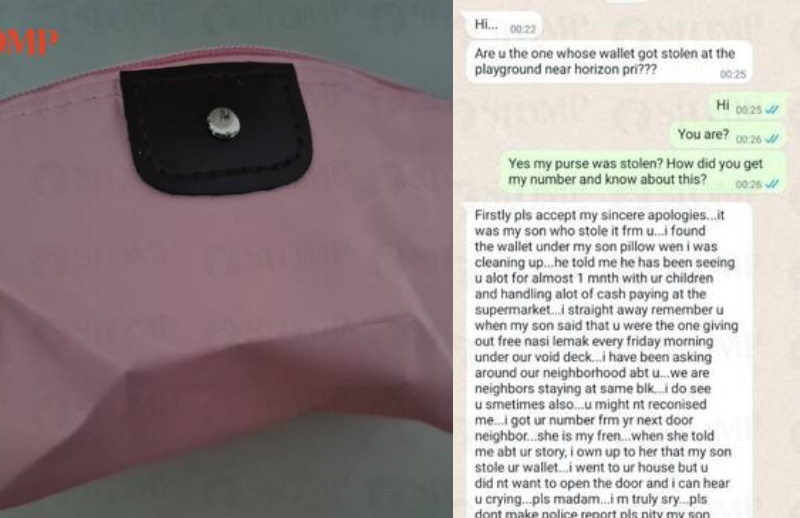 Nora told Stomp: “I had been reading the negative comments on my appeal and it really hurt my feelings. Some said it was a scam and that I was trying my luck.

“It was so heartbreaking to see the comments and I felt badly affected. I can’t believe that there are still so many of such people.”

Many netizens were sceptical about similarities between Nora’s case and that of another Stomp contributor who received over $15,000 in donations after she lost cash of $1,900 earlier this month.

Nora added: “My intention from the start was just to look for witnesses for my case for the culprit to be caught. I did not want any financial sympathy and was not asking for donations. I believe in God’s will.

“I am already depressed with my current situation. Yet this is another phase that I have to go through, reading all those nasty comments. Even though I am anonymous, I still felt the heartbreak when some people said those bad things.

“The pain is too painful to bear. I have to face my children each and every day and force myself to be strong.

“For those wondering, yes, I’m the type that prefers using cash. I was scammed before and all my money in my bank was gone in a blink of an eye. It’s traumatic for me to keep even a single cent in my bank.

“Nonetheless, I considered this case closed. I do have sympathy for the boy and I am doing this for this mother who is pleading for her son.”

Nora said she met up with the culprit and his mother on Saturday morning (Aug 13). They returned her purse – with its contents gone.

Nora recounted: “I got my purse back but it was empty.

“The boy admitted to what he did and I decided to give him a chance. He apologised and told me he regretted it. They also promised to pay me back as soon as possible. I will contact the police and ask if I can drop the case.

“I feel relieved that there is some sort of closure. Although I couldn’t get back the amount I lost, I still feel blessed that my five children are with me. We have been struggling so much after that incident and I feel grateful to have such understanding children.

“Money can be replaced or even come from anywhere, but not our children. I may not be rich like some of you. But I still have a heart.

“I did grieve and almost got into depression after I lost everything, especially after reading all the nasty comments. But God has opened my heart to forgive and let this be a lesson for me too.

“Thank you for reading and I’m sure the story posted on Stomp had somehow helped me too.

“I may be penniless now and don’t have anything to sustain my coming days but I pity the boy’s mother more as they are needier than me. Money is not important anymore now, as long as I have some sort of closure.”