Dwayne Jonhson, famously known as ‘The Rock’, has led the plaudits on social media following Tyson Fury’s thrilling victory over Deontay Wilder in their trilogy fight 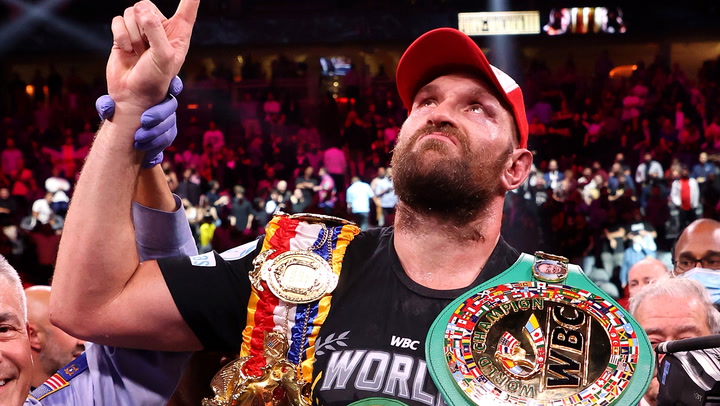 Tyson Fury’s incredible triumph over Deontay Wilder in Las Vegas thrilled boxing fans, and former WWE star Dwayne Johnson even admitted he was left in awe of what he witnessed.

Fury eventually saw off his bitter rival Wilder in the 11th round with a stunning finish to retain his WBC heavyweight title, in a remarkable fight that saw five knockdowns.

It was a fight that will go down in boxing’s history books, with Wilder crashing to the canvas three times – in the third, 10th and 11th rounds – while Fury was knocked down twice both in the fourth round.

In fact, Fury was behind on the judges’ scorecards after the opening six rounds, but managed to swing the momentum back in his favour to reign supreme in Las Vegas.

And following the rollercoaster bout, Johnson, famously known as ‘The Rock’ in WWE, claimed he was left inspired by what he saw in Sin City.

He wrote on Twitter : “That was one of the greatest fights I’ve ever seen. #1 #2 And #1 is undefeated going in.

“Congrats to my friend & champion @Tyson_Fury. What a beautiful & resilient performance.

“What a ‘on the shield’ heart @BronzeBomber has. I was inspired tonight by both men.”

Fury consigned Wilder to his second ever professional defeat – with his first coming when the bitter rivals met in their rematch in Las Vegas in February 2020 after their opening bout ended in a controversial draw.

It leaves Wilder’s heavyweight ambitions in tatters at the moment, but Fury is currently on top of the world.

And Fury is now likely to face British rival Dillian Whyte next after his final victory over Wilder this weekend.

Had Anthony Joshua not been stunned by Oleksandr Usyk last month at the Tottenham Hotspur Stadium, boxing fans would most likely have finally seen a gigantic all-British clash between the pair.

However, Joshua has triggered his rematch clause with the Ukrainian, meaning Whyte has a free path to fight Fury next if he beats Otto Wallin later this month.

See also  Today’s back pages: Spurs crash out, Klopp warns of Atletico’s ‘dark arts’ and Wolves must play in Greece
Share on FacebookShare on TwitterShare on LinkedInShare on Reddit
asianewsdayOctober 10, 2021