US prosecutors, in their first crack at the Theranos founder, sought to undermine days of testimony in which she has presented herself as an entrepreneur of good faith but who made mistakes.

Holmes faces the possibility of prison if convicted by a Silicon Valley jury on charges she duped backers with pledges of revolutionary blood-testing machinery that simply did not work as promised.

Holmes, 37, acknowledged her effort included sending an email in 2015 to media mogul and Theranos investor Murdoch, writing that she thought he would want to “be in the loop” regarding work on a story critical of her startup.

Murdoch had invested more than US$100 million in Theranos just months earlier, according to evidence at trial.

“I couldn’t say it more strongly, the way we handled the Wall Street Journal process was a disaster,” Holmes told the court in San Jose, California. “We totally messed it up.”

Assistant US attorney Robert Leach asked Holmes to explain why an employee that provided information to a Journal reporter was branded “disgruntled” and fired, then threatened with a lawsuit.

“I don’t think she was right, but I sure as hell wish we had treated her differently,” Holmes answered.

The paper’s series of stories raising questions about whether the much-hyped technology, which drew backers like Murdoch and Henry Kissinger, heralded the beginning of the end for Theranos.

Leach also challenged Holmes’s emotional previous testimony of being bullied and abused by Theranos chief operating officer and former boyfriend Ramesh “Sunny” Balwani, having her read message exchanges between the two in which they declared their love.

“You are God’s tigress and warrior. You are extraordinary. I love you,” Balwani wrote in one note to Holmes.

Holmes, who said she was romantically involved with Balwani for over 10 years up to 2016, sniffled and appeared to tear up as she read the message aloud.

A day earlier, Holmes told jurors that Balwani, whom she’d brought in to help run Theranos, denigrated her and forced himself on her sexually when angry about how she was running the company.

Balwani, who is facing trial separately, has denied the abuse allegations, with his lawyer describing them as “salacious and inflammatory” in court filings.

Holmes tended to keep her answers short, sometimes claiming not to recall the intent of a message or note she was asked to explain.

“Anything that happens at your company is your responsiblity at the end of the day, right?” Leach asked.

“That is how I felt,” Holmes replied.

Her defense said in opening arguments that she is guilty of nothing more than trying and failing to realise a visionary idea. 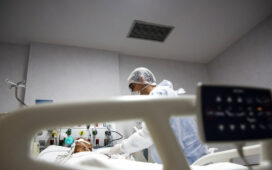