Too good to be true: Singapore man gives $30k to influencer 'girlfriend', realises he's not her only Prince Charming


The attractive woman was his dream girl but ‘dating’ her quickly became a nightmare for one man in Singapore.

It all started one to two years ago when the 41-year-old man, known as Chen, began following on social media a Malaysian influencer based in Taiwan, reported Shin Min Daily News.

He decided to try his luck by sending her a message in November last year. To his surprise, the “girl of his dreams” replied him on Jan 14.

Chen chatted with the influencer every day and the latter would also occasionally send him selfies.

Soon after, the woman became a presenter for a livestreaming platform and asked Chen to support her.

“She said her company wanted her to collect 100 virtual gifts. If she did not meet the quota, she wouldn’t be able to continue as a presenter, so she hoped that I could spend $50 on gifts for her,” Chen told the Chinese daily.

During her livestream sessions, Chen would part with $2,500 worth of gifts to show his support for her.

In March, the influencer sent Chen a long message where she confessed to him and the two officially became a couple.

Unfortunately for Chen, dating the woman came with a hefty cost.

“From that day on, she deemed the 14th of every month to be Valentines’ Day and she asked me to send her gifts. If my gifts weren’t as expensive as her fans’, she would get upset,” he said.

Eventually, Chen began to smell something fishy from the influencer’s messages. Another fan also reached out to him, which confirmed his suspicions that he wasn’t her one and only.

Chen provided a screenshot of the exchange he had with the influencer where she asked him to send her gifts.

In his message to her, Chen wrote: “I’m sorry, I really cannot afford to send you such [expensive] gifts.”

The influencer replied: “My house is your house, am I not worth that much to you? Am I that lousy? I know I’m not your next of kin so you may not think it’s worthwhile [spending the money], but to me you’re the most special. I want to be better, I want everyone to know that we accomplished this together.” 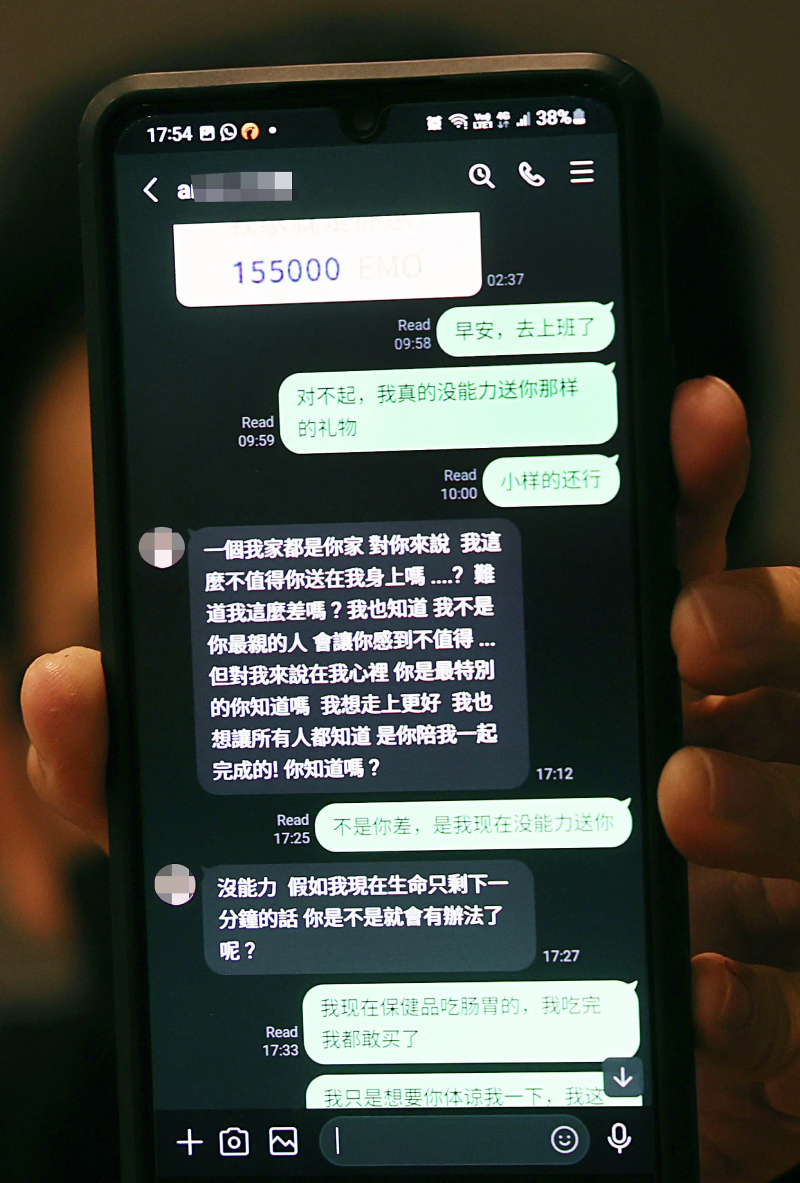 Chen told reporters: “I’m very disappointed. Even though I know that I’ll never get my money back, I hope no one else will end up like me. I’ve since made a police report, I hope they’ll investigate this.”

More than one victim

A Malaysian man known as Lin told Shin Min that he received a call from Chen which made him realise he was also duped. Lin has also made a police report.

Lin said: “We compared her messages to us and they’re quite similar; some of them were even sent at the same time. It might even be an automated message.”

The 32-year-old said he had given $3,000 to the influencer and remarked: “I will be very careful in the future.”

According to Chen, the influencer has also scammed three other men from Singapore, Malaysia and Korea.

“Even though we were all willing parties, I feel this is a scam. The amount of money involved is quite big,” commented Chen.

Transactions in relationships a grey area

Commenting on the case, Steven Lam, founder and director of Templars Law LLC, told Shin Min that monetary transactions in romantic relationships are a grey area in the eyes of the law.

“There are many factors to be considered, such as whether the female keeps making requests or force the other party to do things against his interests,” he said.