SINGAPORE – Passengers flying out of Changi Airport will have to pay more in airport charges from Nov 1, as international air travel continues to recover from the effects of Covid-19.

Passengers on flights originating from Changi Airport currently pay a departure fee of $52.30, comprising a $35.40 passenger service and security fee collected by Changi Airport Group (CAG), as well as a $6.10 aviation levy and a $10.80 airport development levy collected by the Government.

Passengers whose air tickets were issued before Nov 1 will not pay the higher fees and levies, said the Civil Aviation Authority of Singapore (CAAS) and CAG in a joint statement.

There will be no change to the departure fee for transit passengers, who will continue to pay $9 in airport charges for each flight.

Meanwhile, airlines will also have to pay more in aircraft parking and landing fees, CAAS and CAG added.

The statement said that the fees and levies charged will go towards CAG’s operations and current infrastructure upgrading of terminals and future development plans, and the air hub development and regulatory functions of CAAS.

Airport charges at Changi were last revised in 2018, and the authorities had held off further increases during the Covid-19 pandemic.

The latest fee hike comes during the same week that Changi Airport Terminal 4 welcomed its first flights on Tuesday, after it was shut in May 2020 due to plummeting air traffic at the start of the pandemic.

The reopening of T4, which has a handling capacity of 16 million passengers a year, will add to Changi Airport’s capacity, as will the reopening of the southern half of Terminal 2 from Oct 11.

This will restore Changi Airport’s handling capacity to its pre-pandemic level of 70 million passengers a year. 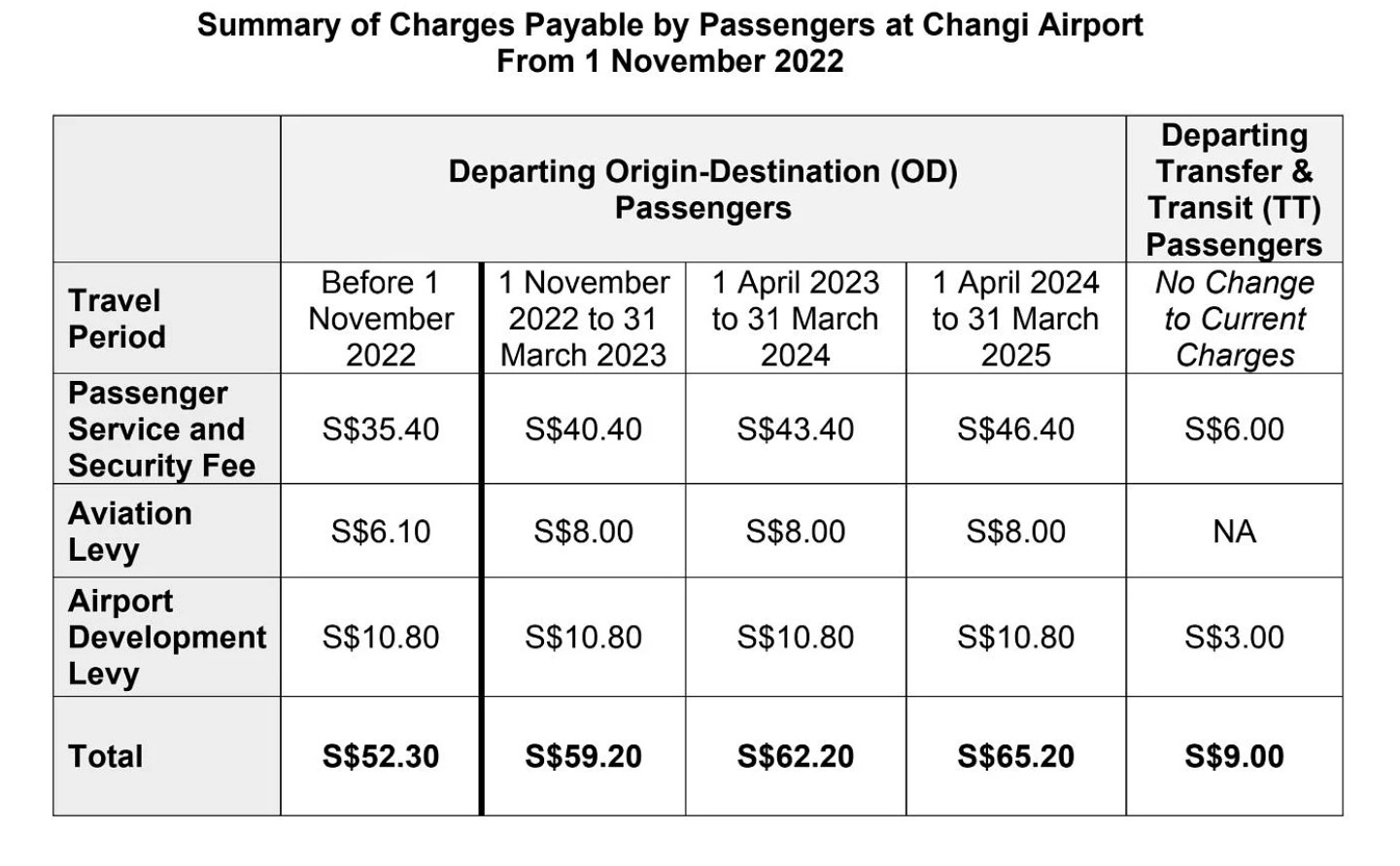 Changi Airport is not alone in increasing its fees, after more than two years of international border restrictions ate into the revenues of airports worldwide.

In November last year, Schiphol airport in Amsterdam announced plans to increase the fees levied on airlines by 37 per cent over the next three years – a move that drew sharp rebuke from the International Air Transport Association (IATA).

Earlier this month, Dutch newspaper De Telegraaf also reported that the Dutch government plans to more than triple the country’s air passenger tax in January next year to €28.58 (S$40), up from €7.95 currently.

Mr Philip Goh, the International Air Transport Association’s (IATA) regional vice-president for Asia-Pacific, said the timing of the increases at Changi is less than ideal, as any additional costs will negatively impact the financials of airlines.

He noted that the Asia-Pacific airline industry is still in the early stages of recovery from the Covid-19 pandemic, with international passenger demand in the region only at about 36 per cent of 2019 levels as of July this year compared to other regions which have seen demand rebound to more than 70 per cent.

Mr Goh said the airline industry appreciates the fact that CAG and CAAS had suspended the planned increase in aviation related charges for two years, which coupled with financial support packages from the Singapore government had helped the sector survive “the most difficult period in its history”. The industry would ideally have preferred that the authorities held off the planned increase, he added.

See also  He doesn't sweat the small things in life

“Aviation hubs like Singapore must ensure they remain cost-efficient in order to maintain their attractiveness to airline operators,” he said.

“We hope the next regulatory review of these charges in 2024 will keep in mind a need for moderation and improvements when considering any further increase in aviation charges.”