US Secretary of State Mike Pompeo (L) and Vice President Mike Pence listen as President Donald Trump speaks about the government shutdown on January 25, 2019, from the Rose Garden of the White House in Washington, DC. – Trump says will sign bill to reopen the government until February 15.

WASHINGTON – Members of President Donald Trump’s 23-person Cabinet on Wednesday issued harsh rebukes of the violence that unfolded at the nation’s Capitol, forcing lawmakers to halt the process to declare Joe Biden’s victory in the presidential election.

The officials, however, stopped short of criticizing the president, who had urged his supporters to take action.

Trump, during a rally earlier outside the White House, had encouraged thousands of supporters to march to the Capitol to protest what historically have been ceremonial proceedings. Trump returned to the White House after his speech and later told supporters in a tweeted video “you have to go home now.”

“This was a fraudulent election … but you have to go home,” Trump said, telling protesters “We love you. You are very special,” before ending his remarks.

In a series of tweets Wednesday evening, Secretary of State Mike Pompeo called the storming of the U.S. Capitol “unacceptable.”

“Lawlessness and rioting — here or around the world – is always unacceptable,” the nation’s top diplomat wrote.

“Let us swiftly bring justice to the criminals who engaged in this rioting,” Pompeo wrote, adding “America is better than what we saw today.”

Acting Attorney General Jeffrey Rosen wrote in a statement, “the violence to our Nation’s Capitol Building is an intolerable attack on a fundamental institution of our democracy.”

Earlier on Wednesday, the Department of Justice sent hundreds of federal law enforcement officers and agents from the FBI, Bureau of Alcohol, Tobacco, Firearms as well as the U.S. Marshals Service to help quell protests.

Secretary of Labor Eugene Scalia called the riots “a low point in the history of American democracy.”

Acting Secretary of the Department of Homeland Security Chad Wolf also condemned the violence writing that “no one has the right to attack ANY federal institution regardless of motivation.”

He added that those who engaged in the rioting should be held accountable for their actions.

Secretary Ben Carson of Housing and Urban Development also joined in the calls for the violence in Washington to end.

“End this violence now. Violence is never an appropriate response regardless of legitimate concerns. Please remember: if a house be divided against itself, that house cannot stand,” Carson wrote.

Health and Human Services Secretary Alex Azar wrote that he was “disgusted” by the unfolding violence that ensued at the U.S. Capitol.

“Physical violence and the desecration of this hallowed symbol of our democracy must end,” Azar added.

“Most importantly, I want all of you to stay safe. Please take care of yourselves and loved ones,” Azar wrote in a subsequent tweet.

In a tweet Wednesday evening, Treasury Secretary Steven Mnuchin wrote “Violence is always unacceptable. We must respect our constitution and democratic process.”

Similarly, Secretary of Commerce Wilbur Ross wrote on Twitter that “violence is never the proper solution.”

“The eyes of America’s children and students – the rising generation who will inherit the republic we leave them – are watching what is unfolding in Washington today,” wrote Elisabeth DeVos, Trump’s Secretary of Education, adding “we must set a better example for them.”

“The disruptions and violence must end, the law must be upheld, and the work of the people must go on,” DeVos wrote.

Nissan news is a vote of confidence in Britain, PM Johnson says

A sick couple rushed to marry on UK COVID ward. Now they have a second chance

Despite winter slowdown and job losses, businesses boost spending as they look toward better spring

Stimulus checks and taxes: What you need to know before filing your 2020 income tax returns 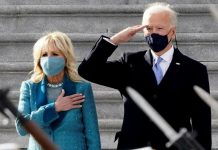 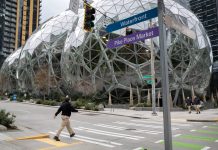 MyPillow still in Costco despite Mike Lindell support of Trump election fraud claims but out at Kohl's, J.C. Penney