A Bradley backs into an aircraft loading bay in this image from 2012. Bradley fighting vehicles, which can both transport infantry and kill tanks, are faster and more mobile than similar vehicle types currently available to Ukraine. They also have a longer effective weapon range than Russian tanks.

The upcoming military aid package, the 29th such tranche, brings U.S. commitment to Ukraine’s fight to about $24.9 billion since the beginning of the Biden administration.

The assistance includes $2.9 billion in weapons to be provided immediately to Ukraine and $225 million in long-term financing to support Ukraine’s military. The package also includes $682 million in foreign military financing to rebuild the arsenals of European allies.

New to this aid package are 50 Bradley infantry fighting vehicles, armored tracked vehicles manufactured by U.S. defense firm BAE Systems. Bradleys are typically equipped with a rotating turret, mounted 25mm gun and TOW anti-tank missiles. The U.S. will provide 500 TOW anti-tank missiles and 250,000 rounds of ammunition for use with the Bradleys.

U.S. National Security Council spokesman John Kirby said it would take “some time” for the vehicles to get to Ukraine.

“What I can tell you is that we are going to do it as fast as I can,” Kirby said when pressed for a timeline during a White House briefing.

He added that “it’s not going to take very long” for Ukrainian forces to learn how to use the vehicles when U.S. troops train them in a location outside of Ukraine.

Also included in the security assistance package are:

The U.S. will send additional ammunition for High Mobility Artillery Rocket Systems, or HIMARS, as well as RIM-7 missiles for air defense and 4,000 Zuni aircraft rockets. The Pentagon will also supply Ukraine with sniper rifles, machine guns, ammunition for grenade launchers and small arms, as well as night vision devices, spare parts and other field equipment.

“Today a new one was announced, and a very powerful one! A package of American defense support for our country. For the first time, we will receive armored vehicles Bradleys, this is exactly what is needed,” Zelenskyy said. 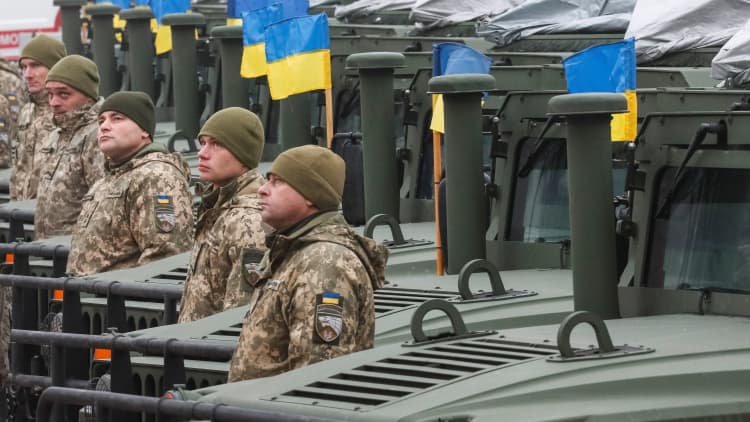