KUALA LUMPUR, Jan 13 — Malay nationalist party Umno will kick off its 2022 general assembly (PAU) in the World Trade Centre here today on the back of its worst general election showing in history — which saw the party lose seats to Perikatan Nasional (PN) spearheaded by its splinter party Bersatu.

Formerly part of the PN government, Umno only managed to keep its position after backing Pakatan Harapan (PH), which won the most number of seats in the 15th general election (GE15) but did not have the numbers to form a majority government by itself.

This has in part “saved” Umno, with its top leadership admitting in recent days that had it not been part of the federal government the party would have close to zero chance of making a comeback in the state elections as PN’s Islamist component PAS has taken over its Malay political base.

“The results of the past several general elections clearly show, despite our attacks on DAP, Malay support has not increased, it has declined,” Umno deputy president Datuk Seri Mohamad Hasan said during his opening speech for its Youth wing’s assembly on Wednesday.

“The factor that encourages Malays to support or not support us is clearly not our stance on DAP,” he added.

This revelation was in contrast to how PN achieved its victory — by singling out DAP in its attack. Now that Umno has allied with DAP in the same government, it remains to be seen whether conservative Malay voters in the east coast and northern states would punish Umno at the ballots.

Similarly, Umno’s grassroots has yet to fully accept Umno’s alliance with PH, in part due to Umno’s own badmouthing of PKR and DAP in previous campaigns. 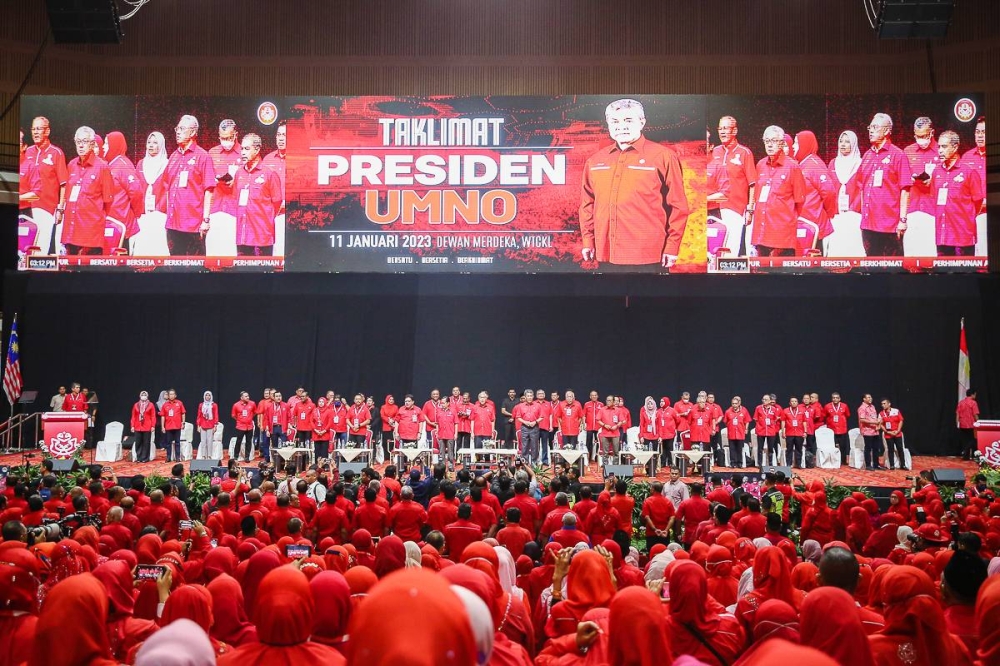 To remedy this, Umno leaders have gone on a campaign to educate and inform the grassroots members starting with those from Pahang and Perak — where the state governments are predicated over Umno and PH’s alliance, with party president Datuk Seri Ahmad Zahid Hamidi himself taking centre stage in a special briefing to delegates on Wednesday.

In his policy speech on Thursday, Umno Youth chief Datuk Asyraf Wajdi Dusuki also urged delegates to back Umno’s participation in the coalition dubbed the “unity government”, as it has been decided by the Umno supreme council in November after the election.

Asyraf Wajdi said that the stance was not only taken to uphold the decree of the Yang di-Pertuan Agong Al-Sultan Abdullah Ri’ayatuddin Al-Mustafa Billah Shah who called for stability, but also took into account the interests of Umno as a party, which always embraces the concept of power-sharing with various ethnic groups.

“We don’t have to continue to be worried and frustrated until we lose our way and give up. We have to realise that even with all the challenges, God still gives us a second chance,” he told delegates.

But before the state elections are held, Zahid and his faction face a more immediate concern — the internal party election that must be held before May 19 after it was postponed to make way for the general election. 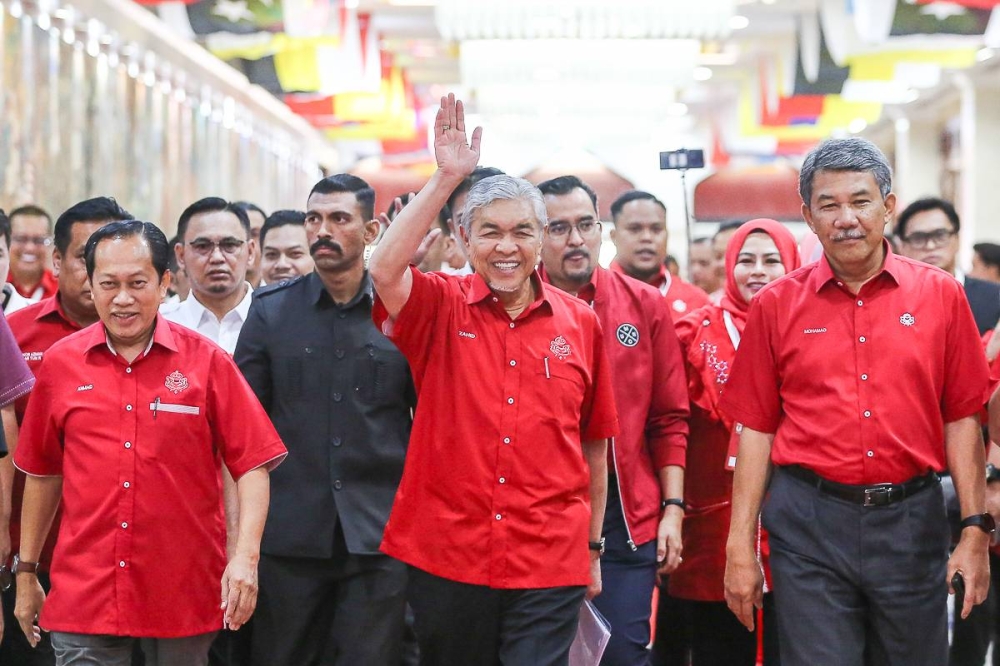 Having taken flak since Umno’s loss in the 2018 general election which also saw PH emerge victorious, Zahid’s position as president is seen as insecure.

This PAU will be his last chance to consolidate his power right before the party elections.

So far, despite calls for the top posts to not be contested, former Youth chief Khairy Jamaluddin has been the sole leader to openly declare his intention to challenge Zahid for the top spot. He had previously lost to Zahid for the same post in 2018.

Khairy has not been shy in stating his intention as early as during the GE15 campaigning, and has recently also courted allies elsewhere by stating that he would keep Umno in the coalition government even if he unseats Zahid.

Adding drama to the mix has been a digital poster disseminated among delegates depicting Umno supreme council member Datuk Seri Johari Abdul Ghani as the presidential candidate under the #ResetUmno, with Khairy listed as his number two, and ally Shahril Hamdan as the Youth chief.

Other leaders such as former prime minister Datuk Seri Ismail Sabri Yaakob and Datuk Seri Hishamuddin Hussein — the latter named by Zahid this week as one of the 10 MPs backing PN — have remained silent over their intentions. The latter, particularly, has yet to be seen at the World Trade Centre’s grounds so far. 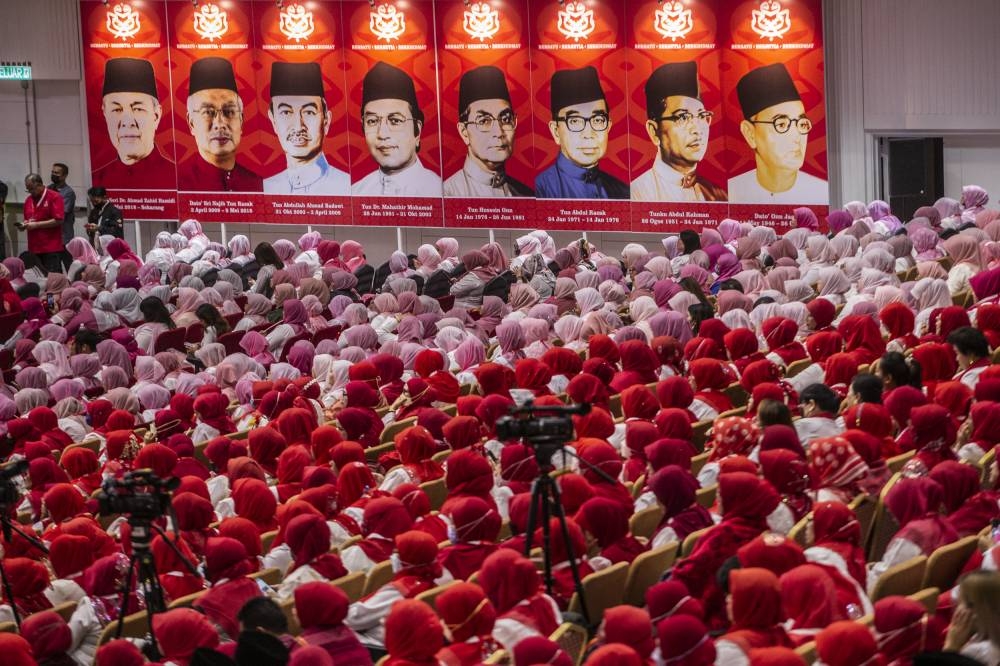 In line to tighten the Umno ship, this assembly will also include an emergency general meeting to allow the automatic participation of information chiefs from the divisions and all three Umno wings — Wanita, Youth and Puteri — as observers at the general assembly.

If passed, this is aimed at enabling these delegates to disseminate the gist of the president’s keynote speech and delegates’ debates to grassroots members at the division and branch levels.

A total of 2,822 delegates and observers will be attending the PAU until Saturday.

In addition, the Wanita Umno general assembly will see the attendance of 1,117 delegates, Umno Youth with 1,146 delegates, and Puteri Umno with 1,113 delegates.