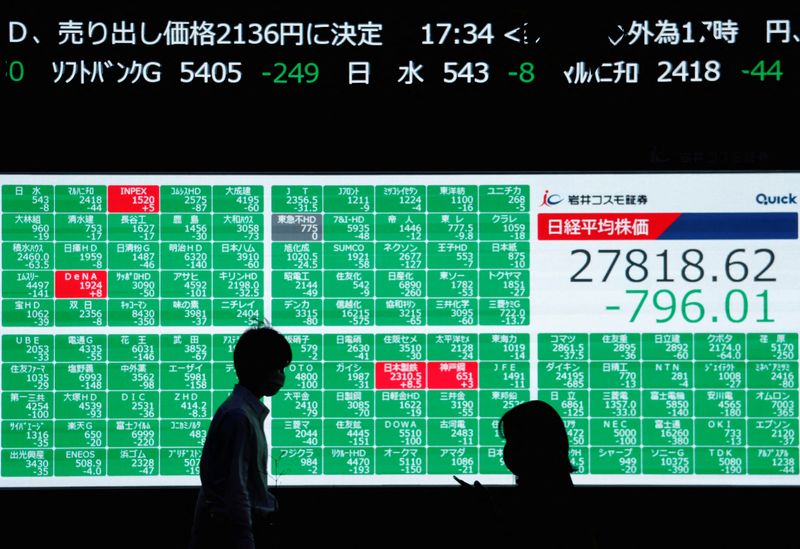 NEW YORK (Reuters) – U.S. stocks gyrated to a higher close on Tuesday, and Treasury yields edged lower as Americans went to the polls and market participants bided their time waiting to see whether Capitol Hill is in for a power shift.

All three major U.S. stock indexes notched their third straight session in the green after wavering in the afternoon, and gold prices surged against the weakening dollar.

Meanwhile, bitcoin and ethereum plunged 11.1% and 16.3%, respectively, after crypto exchange Binance announced it had signed a nonbinding agreement to acquire rival exchange FTX in the face of an apparent liquidity crunch.

” is your worry safe haven, but if there’s any worry in the marketplace it might be short,” said Joseph Sroka, chief investment officer at NovaPoint in Atlanta. “The biggest concern around the election is we may not know the results today.”

The result of the U.S. midterm election will decide whether Democrats lose or retain congressional control halfway through President Joe Biden’s term, raising the possibility of legislative gridlock.

“There’s some optimism around the potential for a divided government, with the Democrats controlling the White House and the Republicans potentially ready to take control of one or both chambers of Congress,” Sroka added.

“A more conservative fiscal policy which could be enacted by Republican-controlled Congress would put less inflationary pressure on the economy and that would make the Fed’s job easier,” he said, adding that periods of gridlock in Washington have historically been positive for equity markets.

Inflation remains a top concern among voters and the Federal Reserve, and market participants – with third-quarter reporting season now largely in the books – are also awaiting crucial consumer price data on Thursday.

European stocks closed at their highest level in eight weeks as investors bet on a market-friendly outcome of the U.S. election.

The pan-European index rose 0.78% and MSCI’s gauge of stocks across the globe gained 0.79%.

lost ground against a basket of world currencies as the prospect of Republican gains boosted investor sentiment and weighed on the safe-haven greenback.

Gold surged past the key $1,700 per ounce level, touching its highest price in a month as the safe-haven metal moved in opposition to the dollar.

gained 2.3% to $8,093 per tonne over supply concerns, brushing off demand jitters over rising COVID cases in China.