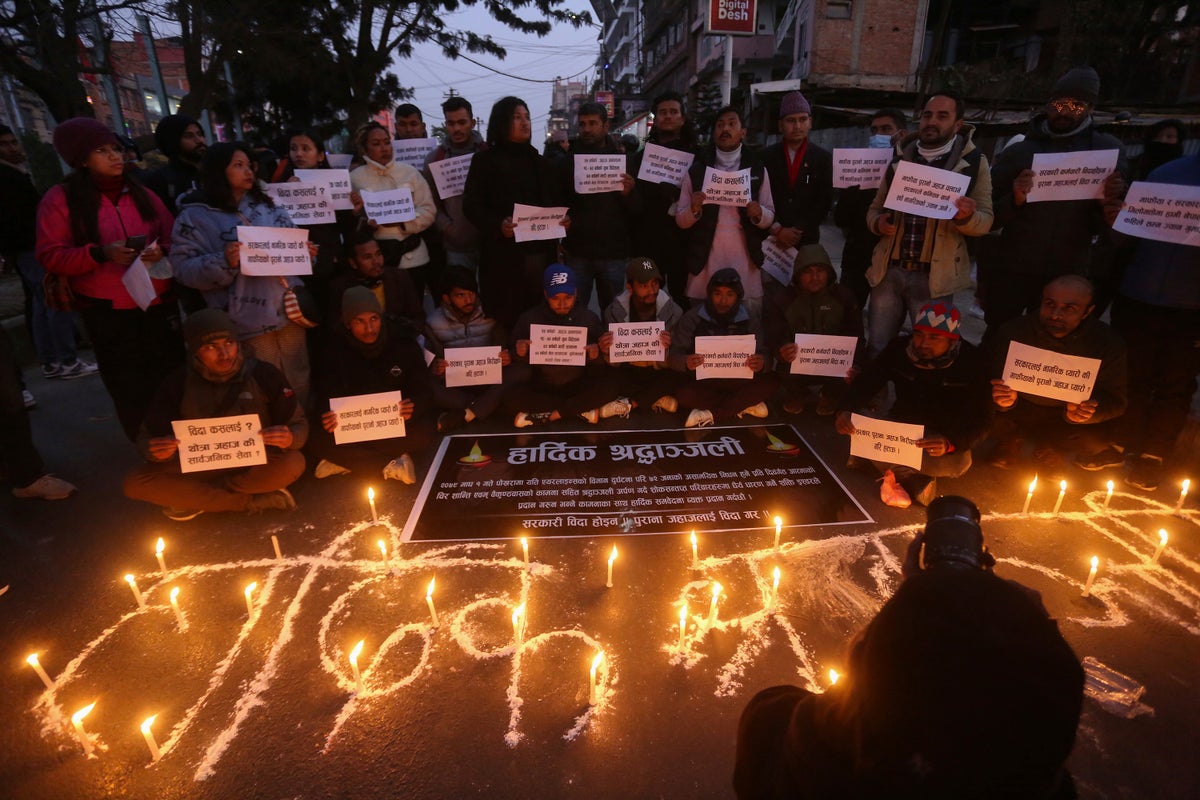 Two US citizens and two permanent US residents were among the 72 people killed on Sunday when a Yeti Airlines flight from Kathmandu to Pokhara crashed.

The flight has been confirmed to have been carrying passengers from the US, Nepal, India, Australia, Argentina, Russia, the UK, and beyond.

State Department spokesman Ned Price revealed the Americans’ deaths during a briefing Wednesday and issued a statement, per ABC News: “We are deeply saddened to hear of the tragic Yeti Airlines crash over the weekend, which killed 72 people, including two U.S. citizens and two lawful permanent residents. Our thoughts are with the families of those on board.”

Among the victims were three Christian worshippers returning from a minister’s funeral, a hotel manager with a passion for mountaineering, a folk singer with a sizable following on TikTok, and a travel blogger who had just told her followers: “Go to Nepal!”

Minutes after that post, the plane crashed into a gorge while attempting to land, killing all aboard, including four crew members.

Here’s what we know about the victims of the Nepal air crash.

Nira Chhantyal was a well-known Nepali folk singer who often posted videos of her performances and lip-syncing to Hindi songs to her roughly 125,000 TikTok followers.

And, according to her Facebook page, as first reported by Insider, she was travelling to Pokhara to perform at an event when she was caught up in the disaster.

Less than an hour before the flight, she had posted on her Facebook page in honour of the Maghe Sankranti festival, which marks the winter solstice.

“On the auspicious occasion of Maghe Sankranti, I express my best wishes to all the parents, brothers and sisters living in the country and abroad,” wrote Ms Chhantyal.

Since then, comments under her posts have been flooded with fans and well-wishers expressing their sorrow at her death.

“You left, your memories are still remembered. We won’t meet now,” said one, with a string of weeping emoji. Another said: “You went to Pokhara but left in a way that you will never return. Heartfelt condolences.”

Three Christians returning from a funeral in India

Raju Thakuri, Rabin Hamal and Anil Shahi were three men from Nepal who were reportedly returning to Pokhara from the funeral of a Christian evangelist.

According to The Times of India, the three men had been paying their respects to Mathew Philip at his hometown in the Indian state of Kerala.

Mr Philip had been a Christian minister for 45 years in Nepal until two years ago, when he returned to Kerala after being diagnosed with cancer.

His son Joel Mathew told the Times that Mr Mathew had been a father figure to the three men and their two surviving companions, who had parted from them in Kathmandu, Nepal.

“They spent the whole day at the church and at home and left in the evening after the funeral,” said Mr Mathew.

“At the Anickad Brethren Assembly, where the mortal remains of my grandfather were kept for public homage, they sang a Nepalese song which my grandpa liked most. They also spoke about him and how he had influenced their lives.”

Aussie teacher who ‘lived life to the fullest’

Another victim was Myron William Love, a 29-year-old Australian teacher who was described by the country’s media as an avid surfer, cyclist, and traveller.

“It is with extreme sadness to say we have lost one of the best humans I have ever known,” said Sydney artist James Lesjak-Atton on Instagram, according to The Guardian (the post is no longer accessible).

“Myron was one of the loves of my life. A truly kind, fun, energetic man. We will forever love you my man.”

In a statement given out through Australia’s foreign ministry, Mr Love’s family and that of his partner Annabelle Bailey said: “We would like to express our deep gratitude for the amazing support shown to us by our family and friends in this time of need.

“Myron has been a rock to both of our families for many years and he has always lived his life to the fullest. He has put so much into his short life that most of us couldn’t fit into our lifetime.

“We do request at this time that you offer us peace and privacy for us to grieve, and deal with this tragedy.”

Elena Banduro, 33, a social media manager from Moscow and travel blogger, shared a selfie from the Yeti Airlines flight on Sunday moments before it crashed.

She captioned her last selfie: “Go to Nepal!”

Her Facebook and Instagram pages have since filled up with messages offering condolences for her death, with some calling her the “brightest” and “kindest soul”.

“Fly high sis, and go to the places you dreamt of going,” a friend posted on her wall. The Russian Ambassador to Nepal, Alexei Novikov, has confirmed the death of four Russian citizens who were on board the plane.

The other three have been identified as Viktoria Altunina, Yuri Lugin and Viktor Lagin.

A former cop who became a Buddhist teacher

Arun Paudel, 47, was flying with his daughter Prasiddi on his way back to the school he had founded in Lumbini in 2013.

Mr Paudel had worked as a police officer in Nepal before being introduced to Buddhism by his brother. He studied religion in South Korea before becoming a Buddhist minister himself in 2009.

Park Dae-seong, a spokesperson for the Won Buddhist order, confirmed Mr Paudel and his daughter’s deaths on Monday.

‘Now there’s no one left in his family to earn’

The Associated Press interviewed several other Nepali families of people who died in the crash.

Bimala Bhenderi told the agency that she was hoping to meet her friend Tribhuban Paudel on Tuesday, then heard that his flight had crashed. “I’m so sad, I can’t believe it still,” she said, visibly tearful.

A man named Bikash Jaiswal said he was asked to identify his brother-in-law Sanjay Jaiswal, but could only do so via the ring he wore. He said he had not yet told his wife, the man’s sister, who had just given birth to their daughter.

Mr Jaiswal worked as a marketing agent for a private pharmaceutical company in Kathmandu, and was flying to Pokhara for the birth. After the crash, his body was kept in the same hospital where his niece was born.

“He was a hardworking person, and now there´s no one left in his family to earn,” Bikash Jaiswal said.

Ruan Calum Crighton was a British ballet dancer from Brentwood, Essex, who had performed with the national ballet companies of Finland and Slovakia.

“I got the info yesterday, but I was hoping it wasn’t him,” said one of his friends in the industry, who works at the Slovak National Theatre. “Ruan was one of my best friends. We dance together on stage for years… I’m devastated.

“It is very hard to say something about [him] right now. But first, he was a sunshine.”

A BBC news article in 2008 described Mr Crighton as “set for stardom”. He was initially misidentified as a citizen of Ireland, but that was corrected by the Irish government on Monday.

‘Going to Nepal was her dream as a mountaineer’

An Argentine hotel manager with a passion for climbing and the outdoors has also been named as one of the crash victims.

Jannet Palavecino, 57, from Neuquén province in western Argentina, was on holiday enjoying Nepal’s towering mountains when she died, according to the Argentine newspaper Clarín.

The Palevecino family is reportedly known locally for running the Hotel Suizo, having arrived in Argentina from mountainous Switzerland at the beginning of the 20th century.

“Jannet Palavecino, may you rest in peace. We will miss you and always keep you in our memory. My greetings and condolences to all the family and affections,” said Neuquén governor Omar Gutierrez on Sunday.

“Going to Nepal was her dream as a mountaineer,” one of Ms Palavecino’s friends posted on social media.

Another said: “Maximum respect and admiration for a powerful woman who lived and died fulfilling her dreams.”