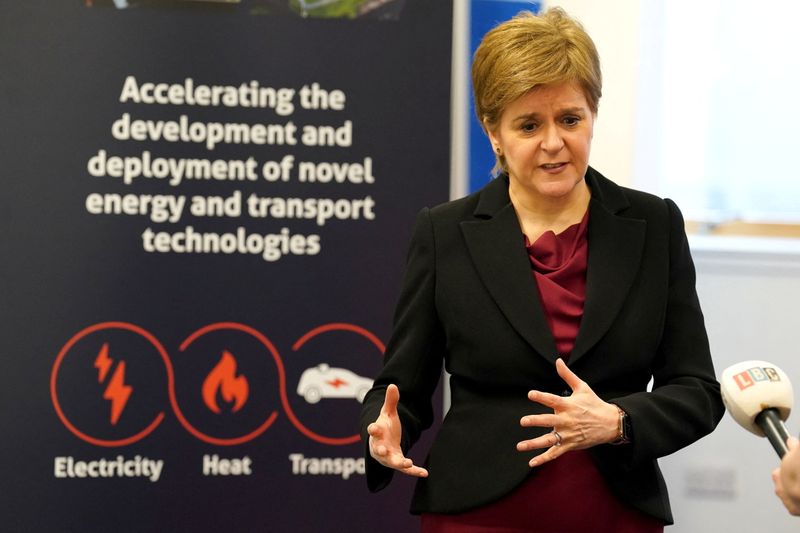 © Reuters. FILE PHOTO: First Minister of Scotland Nicola Sturgeon speaks to the media during a visit to PNDC ahead of the publication of Scottish Government’s Energy Strategy and Just Transition Plan, which sets out policies on domestic energy production and a plan

(Reuters) -Scottish first minister Nicola sturgeon is preparing to row back on her plan to make the next general election in 2024 a “de facto referendum” on Scottish independence, The Times reported on Saturday.

The Scottish National Party (SNP)’s executive committee will be presented with an alternative option on Saturday which would say that votes for the SNP will be treated as a show of support for a second referendum, not a backing for separation, the newspaper said citing a document seen by them.

Sturgeon had said in November, after the UK’s top court blocked her party’s bid for a new independence vote, that the next national election, in 2024, would be an effective referendum on independence.

The Times report said the alternative option would lower the bar for victory at the election from more than 50 per cent of the vote to a simple majority of nationalist MPs, which would be seen as a sign of support for a second referendum.

Sturgeon announced plans in June last year for a second referendum to be held on Scottish independence as the Scottish government, which is led by her pro-independence SNP published a referendum bill outlining plans for the secession vote.

See also  BoE's Bailey warns against over-reaction to rising inflation
Share on FacebookShare on TwitterShare on LinkedInShare on Reddit
asianewsdayJanuary 14, 2023