RAMSTEIN AIR BASE, Germany: Ukrainian President Volodymyr Zelensky said Friday there was “no alternative” but for the West to give Ukraine heavy tanks, as Germany failed to commit its sought-after Leopard vehicles to a possible spring offensive by Kyiv.

A US-led meeting of some 50 Ukraine allies came through with billions of dollars’ worth of military hardware, including ample armored vehicles and munitions needed to push back Russian forces.
But Zelensky stressed he needed battle tanks on top of that, as US Secretary of Defense Lloyd Austin said Ukraine was expected to mount an attack against dug-in Russian troops in the coming weeks.
“We have a window of opportunity here between now and the spring… whenever they commence their operation, their counteroffensive,” Austin said at the meeting at Ramstein Air Base in Germany.
Zelensky urged the group in a video address to “speed up” arms deliveries and stressed Germany’s Leopard tank was a primary need.
“Every day we make it more obvious that there is no alternative, that a decision about tanks must be made,” he said. 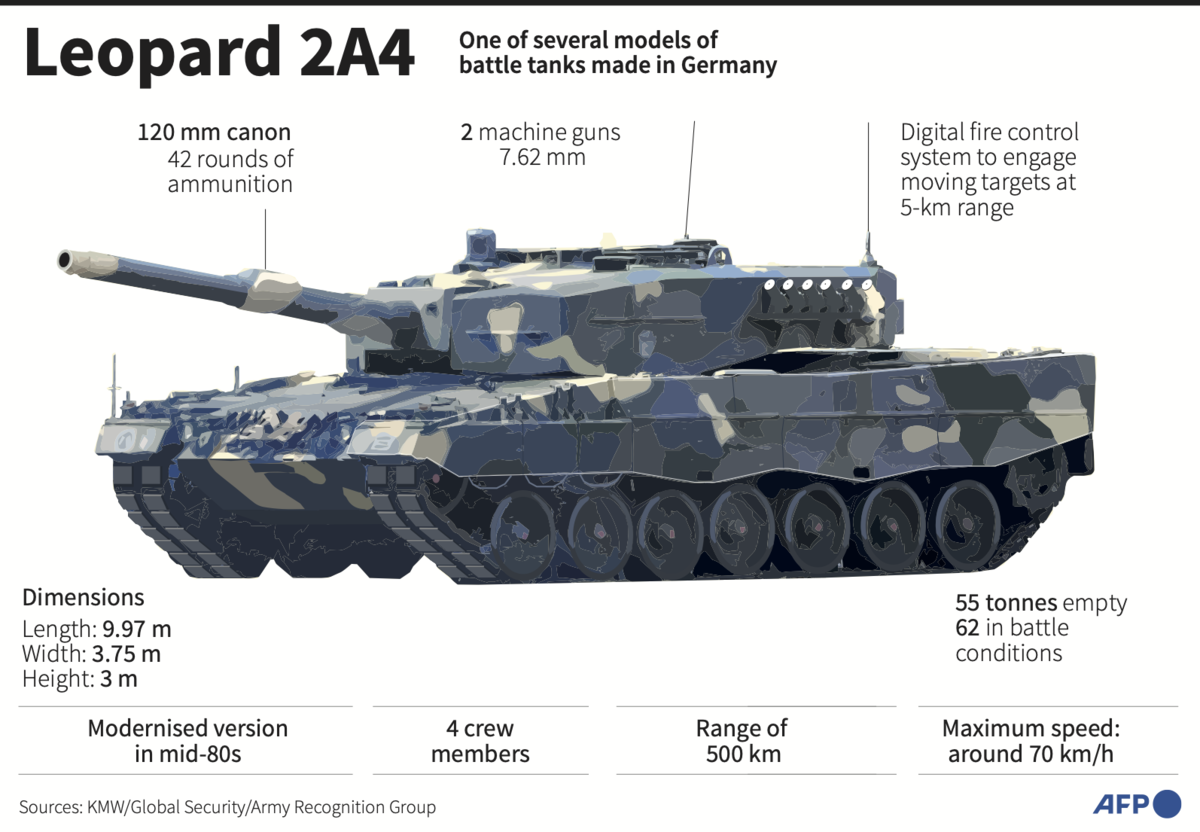 Expectations had grown ahead of the Ukraine Contact Group meeting, a grouping of arms providers led by Austin, that Germany would at least agree that other countries operating Leopards would be permitted to transfer them to Kyiv’s army.
The reasons for Germany’s reticence remained unclear, as Britain has agreed to send 14 of its Challenger 2 tanks to Ukraine.
German Defense Minister Boris Pistorius told reporters: “We still cannot say when a decision will be taken, and what the decision will be, when it comes to the Leopard tank.”
Austin defended Germany against criticism that it was not doing enough to help Kyiv.
“We could all do more,” Austin said, emphasising that Berlin was a “reliable ally.”

US officials said Ukraine still faces an uphill battle against Russian forces, who still occupy one-fifth of the country, 11 months after invading.
But they spoke of a possible coming campaign by Ukraine to retake parts of that.
US Joint Chiefs Chairman General Mark Milley pointed to the substantial amount of equipment — much of it armored vehicles and artillery — that Ukraine was being pledged at Ramstein, as well as the large-scale training of its forces by allies.
“I do think it’s very possible for the Ukrainians to run a significant tactical or even operational-level offensive operation to liberate as much Ukrainian territory as possible,” Milley said.
A senior White House official, speaking on grounds of anonymity, said Kyiv should not fixate on defending the eastern city of Bakhmut at all costs and instead use a window of opportunity to prepare a major counter-offensive against Russian forces.
The official said the months-long defense of Bakhmut has had little value for Ukraine and a Russian victory there would not result in any significant shift in the war.
Instead, Ukraine should focus on building a more sophisticated and heavily armed force capable of launching an offensive in the south, the official said.
The Kremlin meanwhile warned Friday that Western tanks will make little difference.
“One should not exaggerate the importance of such supplies in terms of the ability to change something,” Kremlin spokesman Dmitry Peskov told reporters.
“We see an adherence to the dramatic delusion about the possibility of Ukraine having success on the battlefield,” said Peskov.
“This will add problems for Ukraine, but this will change nothing in terms of the Russian side advancing on the path to achieving its goals.”

The siege of Bakhmut hardly slowed, as on Friday a couple stood across the street from their apartment building in the city, watching helplessly as their home burned, set ablaze after a shell hit nearby.
“Look, look, it’s my flat, it’s the only flat I have,” said Olga Tomakh, 70, on the verge of tears.
About 15 kilometers from Bakhmut, in Soledar, the United Nation’s first humanitarian convoy arrived in the town that has been largely reduced to rubble.
Russia claims to have seized Soledar, but Ukraine insists the fighting, in which both sides have suffered heavy losses, is ongoing.

Meanwhile, the United States said it was officially designating the Wagner private military group, which has taken the lead in the Bakhmut-Soledar campaign, as a “transnational criminal organization.”
The White House showed US intelligence photographs of North Korea supplying arms to Wagner for its Ukraine operations, and said the private army had become a rival to the formal Russian military.