SAO PAULO: Many in Latin America have been demonstrating against Iran’s brutal crackdown on nationwide protests sparked by the death in September of Mahsa Amini, 22, at the hands of the country’s morality police for allegedly wearing her hijab incorrectly.

Demonstrations across Latin America have been galvanized by the fact that hundreds of Iranians are now facing long prison terms and even death sentences for protesting.
In Mexico, for example, protesters assembled in front of the Iranian embassy in the nation’s capital on Dec. 19.

But that was not the only reason, she said. “We were horrified by the large list of people currently facing death sentences. The message that the Iranian government wants to convey is that citizens must be afraid of expressing their political opinions.”

According to Human Rights Iran, an NGO based in Norway, at least 100 people have been charged or sentenced to capital punishment so far.

Feminist activists and Iranians living in Mexico organized a protest in the capital in September. 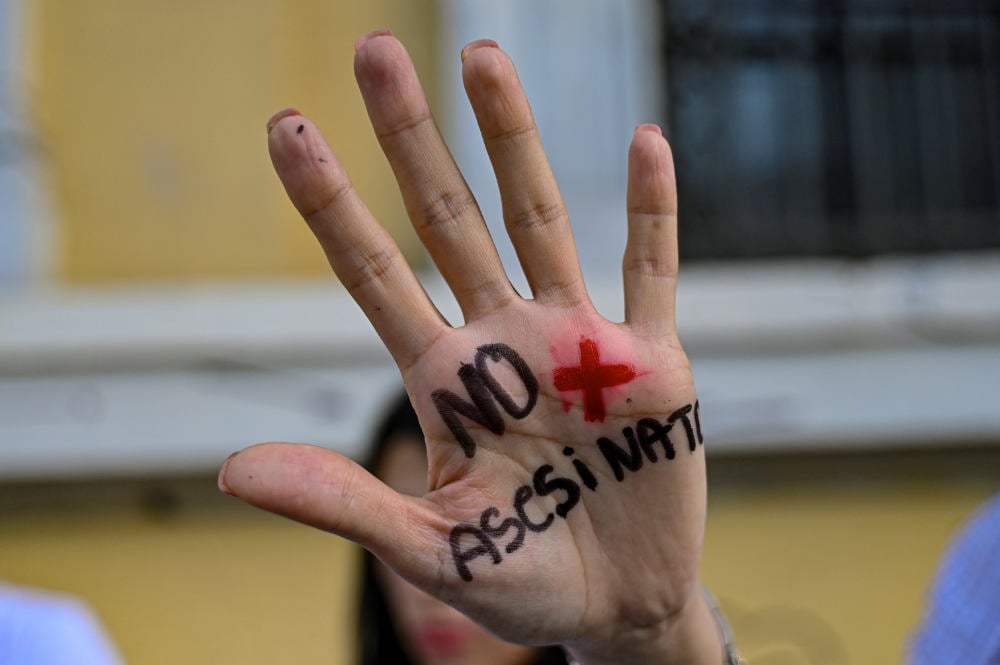 Schietekat said some of the Iranian-born participants were identified by the embassy’s surveillance cameras and later had problems renewing documents.

“Now, some of them were obviously afraid of retaliation and preferred not to attend. It was important for them that we, Mexicans, showed our solidarity,” she added.

Laura Vazquez, one of the protesters, told Arab News: “I heard about it on social media and decided I should go. It’s an important cause. Nowadays, people can easily ‘support’ a protest but not show up.”

See also  Coronavirus can still be beaten, too early to declare pandemic: WHO chief Tedros

She added: “The most valuable thing was to be present and to show our solidarity. The problems in Iran didn’t begin in September. They’re historic.”

Mexico abstained in the UN vote that resulted in Iran’s removal from the organization’s women’s rights agency in December.

In Schietekat’s opinion, that was a serious mistake: “The (Mexican) government based its decision on the principle of non-intervention, but we can’t have diplomatic relations with a country that systematically violates human rights.”

There was a “disproportionate” police presence during the demonstration on Dec. 19, she said, but no incidents were reported.

There have also been recent demonstrations in Argentina, but the most visible action coming from the country has been an online petition against Nasr-Azadani’s execution.
Created by Natalia Marcellino, the campaign has already been supported by 1.8 million people worldwide.

“I don’t have any particular experience with Iran’s political situation. I’m a psychologist who manages a school for children with special needs. But I was very impacted by the news and I decided to do something,” she told Arab News.

“I was surprised by the massive reaction to the petition. I’m glad to see that we can come together and do something. Nasr-Azadani has defended Iranian women and now has to be helped by us.”

“I think the World Cup may have given more visibility to his case, given that people were more connected to football and he’s a well-known player,” Marcellino said.

Uruguayan footballer Luis Suarez and Colombian Radamel Falcao Garcia are among the professional athletes who have expressed their solidarity with Nasr-Azadani.

A report published in 2021 by the Arab News Research and Studies unit, titled “Border wars: Iran’s terror haven in Latin America,” noted that since the 1979 Iranian revolution, the Islamic Republic had worked tirelessly to strengthen its ties with Latin American countries, while also seeking out political allies among the region’s leftist governments that shared its hostility toward the US.

The report shed light on the nature of the political and economic cooperation between Iran and Paraguay, and analyzed the suspicious activities and operations of by Iran and its proxies, such as Hezbollah, in the Tri-Border Area in general and Paraguay in particular.

In the 1990s, a leading Paraguay political and religious figure, Fernando Lugo, made a historic visit to Iran, a gesture repaid by Tehran through its support for his successful presidential bid in 2008, according to Dr. Hamdan Al-Shehri, a political analyst and international relations scholar.

“Nevertheless, diplomatic and economic relations between the two countries remained somewhat modest compared with Iran’s ties with other Latin American countries,” he wrote.

“However, in the years after it became the target of international sanctions, Iran realized that it needed a haven for its illegal activities that was out of sight of the global community and immune from legal action.

“In some Latin American states, it found the ideal staging ground for its illicit operations, especially within the so-called Tri-Border Area of Argentina, Paraguay and Brazil. According to several investigations, Iranian activities being closely monitored in this frontier region range from drug and arms smuggling to money laundering and terrorist training.“

Fast-forward to the present and prominent political leaders in Latin America are condemning Iran’s repression. When Colombian President Gustavo Petro congratulated Argentina on its World Cup victory on Twitter on Dec. 18, he urged Iran to not execute the footballer.

Colombia has endorsed criticism of Iran in the international arena over the past few months.

Tehran formally complained to Colombia over its vote to oust Iran from the UN women’s rights agency.

In September, Chilean President Gabriel Boric condemned Iran for Amini’s death in his speech at the UN General Assembly.

Chilean feminist movements have been following events in Iran, and have organized several initiatives against the regime.

“We have solidarity ties with several women’s groups, including with Iranians. We’ve protested against Iran and produced videos about it with Farsi subtitles so they can see there that we’re supporting them here,” Javiera Manzi, a spokeswoman for the feminist group CF8M, told Arab News.

Mahmonir Nadim, an Iranian-born singer who has lived in Brazil since 2012, told Arab News: “Many people in Brazil say they don’t know enough about the Iranian situation so they can’t give an opinion.

“What else must they know when people are being arrested and killed for protesting against the government?”

Nadim said she had always dreamt of being an artist, but that would be too difficult in Iran after the 1979 revolution. “That’s why I decided to come to Brazil.”

She and her sister organized a protest in Brazil in September, and are now planning another one. They want more Brazilians to join them.

“The Brazilian media isn’t properly showing what’s going on there, and Brazilians are quite disconnected from that reality,” Nadim said, adding that many of her Iranian friends have been detained in recent months. “People in Iran hope we can be their voice. We have to help them.” 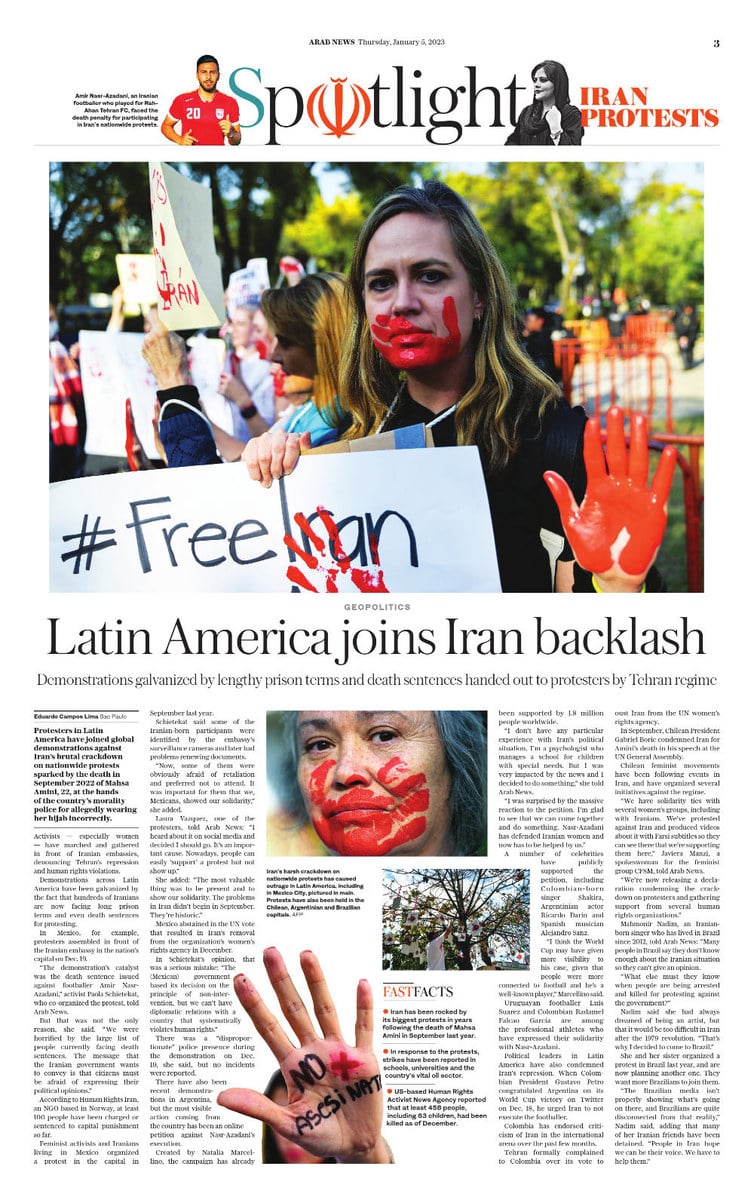